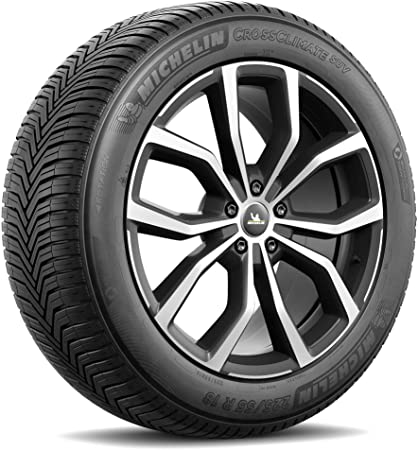 This review is for the Michelin CrossClimate SUV to help you decide if this tire is for you.

To learn more about this tire, we’ve taken a deep look into Michelin’s manufacturer specifications. We also researched how the Michelin CrossClimate SUV performed in many tests. Then, we collected that data and paired it against customer reviews to build a comprehensive view of the tire’s capabilities.

Based on the research, data, and customer reviews that we’ve compiled and processed for this Michelin CrossClimate SUV review, we highly recommend these tires.

The CrossClimate SUVs deliver in every category: from excellent traction to price. They’re stable and responsive in many kinds of weather from dry to light / moderate snow. We think the CrossClimate would be a good tire for your all-season needs.

To find out how we reached our conclusion, read on for the full breakdown of the Michelin CrossClimate SUV tire. We’ve organized the article and split it into three categories to give a clearer picture. The categories are:

Now, if you’re ready to find out if the Michelin CrossClimate SUV is for you, buckle your seatbelt, and let’s take a ride!

The Michelin CrossClimate SUV tire is designed as an all-weather / all-season tire for your passenger car, minivan, or SUV. Michelin has focused on safety as well as high-mileage use for these tires and offers a 50,000-mile limited warranty to back it up.

Michelin is known as the leading tire manufacturer in the United States in all categories, and they have the price to match it. The CrossClimate SUV price range leans towards the more expensive, high-end side of things (around $240 per tire). However, that price tag comes with Michelin quality.

The CrossClimate SUV was not a successor to any other tire but has impressive test results for a debut model—even in snow. But it is important to note that the CrossClimate is not a snow tire, so if you plan to drive heavily in Winter conditions, you may want to consider a designated Winter tire set for those cold and slippery months.

Now let’s dive into a deeper breakdown of the Michelin CrossClimate SUV tires, and evaluate them based on their three main categories.

The Michelin CrossClimate SUV tire is impressive in its overall performance. The tires are designed for stability thanks to solid construction and don’t give much in the way of transitioning between dry, wet, and snow conditions. In corners, the tires hold and offer a secure feeling while behind the wheel.

Michelin has also incorporated two steel belts into the tire’s interior which allow a smooth drive from low to high speeds and in a variety of conditions. Many user reviews appear to back this up.

This is where a tire shows its true colors, and the Michelin CrossClimate SUV did excellently. With its wide lateral grooves and open shoulders, the tire lets water pass through its treads without compromising its traction and reducing the potential of hydroplaning.

The tire’s beveled-edged tread blocks increase grip on wet roads, and the 3D self-locking sipes add traction to the edges for security in the rain and wet snow.

Customers reported that the tire was smooth and quiet in dry conditions, and felt as though they had upgraded their vehicle’s suspension.

The CrossClimate SUV is certified as a Three-Peak Mountain Snowflake (3PMSF) tire. This means that it can handle an elevated level of snow traction compared to other all-season tires.

Customer reviews reported that the tires were so effective in the snow that they didn’t even switch to their winter tires in many cases. With that said, it’s important to remember that this is not a winter tire, and if you plan to have heavy snow and ice over the winter season, you’ll want a dedicated snow tire for that not only performance but safety as well.

Handling on the Michelin CrossClimate SUV offers no problems. With its compound molded highly-directional tread pattern and nearly solid transverse ribs, the CrossClimate performs amazingly in handling stability not only for turns but straightaways as well.

Some customer reviews noted that the handling did not noticeably change from low to high speeds.

Michelin hasn’t designed any specific noise-canceling technology for the CrossClimate SUV, though there doesn’t seem to be a need for it. According to TireRack.com’s noise tests, it scored excellent in this category.

Some customers did report a noise increase at 15,000 miles, while others praised the quiet ride from day one until replacement.

According to tests, the Michelin CrossClimate SUV offers a smooth and comfortable ride in a variety of weathers. The internal construction of the tire consists of a single-ply polyester casing supporting two steel belts, and a polyamide reinforcement aid which increases handling performance and gives drivers a sense of stability at high speeds.

User reviews showed that the drive comfortability was noticeable, and in certain cases felt like an upgrade to the suspension.

Michelin offers a 50,000-mile warranty on the CrossClimate tire.

Some customers reported “burring” on the tire treads at their 5,000-mile rotation, but this is covered under the 50,000-mile warranty that Michelin offers with it.

Though Michelin typically means more money out of pocket, you’re paying for quality in all sectors—the CrossClimate is no exception.

From performance to durability, the CrossClimate lives up to the expectations set by their manufacturer over their many years of producing trustworthy tires.

The CrossClimate SUV stands out in its performance, noise, and durability. While it is on the pricier side, it’s overall quality makes it worth the expense.

User reviews reflect similar sentiments, and most recommend the tires for a variety of reasons covered above. Some even reported buying a second pair.

The CrossClimate SUV has since been replaced by the Michelin CrossClimate 2 though, which has noteworthy upgrades from its predecessor including increased snow and icy weather performance and lower rolling resistance. The warranty was also increased to 60,000-miles on the CrossClimate 2.

Based on the research, data, and customer reviews that we’ve compiled and processed for this Michelin CrossClimate SUV review, we highly recommend these ties.

The CrossClimate SUVs deliver in every category: from excellent traction to price. They’re stable and responsive in many kinds of weather from dry to light / moderate snow. We think the CrossClimate would be a good tire for your all-season needs.