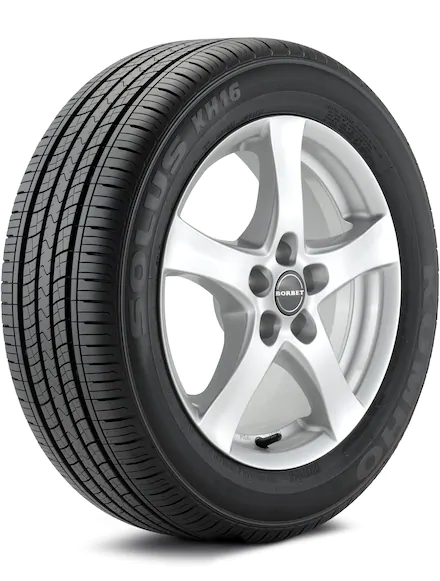 This article takes a look at the Kumho Solus KH16 tire to help you decide if this tire is right for your ride.

We have researched all aspects of the Solus KH16 and taken a deeper look at the manufacturer’s specifications and researched how well this tire is made. We also looked at how the Kumho Solus KH16 was tested in various environments.

We then compiled the data and compared it with customer reviews for a full-spectrum view of this tire and its performance.

Based on the data we gathered from our research we can conclude that the Kumho Solus KH16 is a good option if you’re on a tight budget and don’t drive on heavy snow. It performs well in dry and wet conditions and provides a comfortable journey for the driver and passengers.

Tread wears quickly We will be looking at handling, noise, comfort, durability, and price to help you decide if this is the tire for you.

Now, let’s get between the treads of the Kumho Solus KH16 and see what it’s made of.

Kumho Solus KH16 is the manufacturer’s grand touring all-season tire. It was developed for sports coupes and sporty sedans. This tire puts together low noise, quality of ride, smooth handling, durability, and traction for driving in any season so that you don’t need to worry about switching tires when the first light snowfall of the year hits.

Though the Kumho Solus KH16 is classified as an “all-season tire,” it is best on the pavement rather than off-road conditions. So if you are planning to be driving in snow for the majority of the winter season, it might be best to consider a dedicated snow tire.

The Solus KH16 is also an OE tire, or Original Equipment, which means that it came on the vehicle from the factory. So if you are buying this tire, most likely, you are replacing one of the OEs.

In its class, the Solus is more affordable than most of its competitors but performs at a higher level than its price reflects.

It is designed with ESCOT technology, an all-season compound, and a symmetrical design allowing for all four tires to rotate interchangeably.

According to tests conducted by TireRack.com, the Kumho Solus KH16 was impressive in wet performance. They scored well in hydroplaning resistance, as well as wet tracking.

The tire tread blocks are designed with a multi-season symmetrical tread compound shape. This construction also has a few features to increase grip in the rain such as full-depth circumferential and lateral grooves.

User reviews claimed that the tire did well in traction and cornering in wet environments.

Users of the Solus KH16 reported excellent dry driving in both straightaways and corners.

The Kumho Solus KH16 tested its lowest in the snow. But seeing as it is a standard all-season tire, the Solus is not designed for winter conditions beyond a light dusting and can struggle in heavy snow.

Just like for wet performance, the Solus KH16’s design was intended to increase traction in light snow. They used the multi-weather tread composite and symmetrical tread pattern with comprehensive circumferential and side grooves to increase the grip in a dusting of snow.

Based on tests and customer reviews, the KH16 performed way below average in winter conditions compared to other all-season tires in its class, even in light snow (which most all-season tires do okay in).

User reviews seemed to back up this, saying the tires slipped when stopping, though eventually grabbed. It’s better to have a dedicated snow tire if you drive in snowfall all winter.

According to customer reviews, the KH16s felt solid in corners and at high speeds on straight roads.

The tire’s structure has dual steel belts with nylon edge strips which decrease the wobble of the tire and assist in shock absorption on bumpy conditions from slow to high speeds.

Customer reviews often noted how noisy the Kumho Solus KH16 was. Some claimed they rumbled on rougher terrain and were high-pitched on the highways, though they mentioned that the volume wasn’t terrible in either case.

Inside the KH16 are twin steel belts reinforced with nylon belt border pieces to enhance firmness and strength at all speeds, while polyester body plies increase the casing’s strength for an effortless ride.

Customers reported that the tires were a smooth and comfortable ride.

User reviews seemed to range in this area. Some claimed that the tires only lasted 40,000 miles before needing new ones, while others stated that the tires lasted much longer when serviced correctly. The longevity is most likely is dependent on how often you rotate these symmetrical tires, and what conditions they are used.

For its price quality and durability, it is a good purchase, but don’t expect any hidden gems from this tire.

Overall, the Kumho Solus KH16 is a decent option on a budget, but there are certainly better tires out there if you can spend a little more. We recommend looking at tires such as:

But if you are looking for a tire with impressive dry handling, smoothness, and low noise at an affordable cost (as long as you don’t need a tire for snow traction beyond a light dusting) the Solus KH16 will meet your needs.

For snowy conditions, you will want to consider a dedicated snow tire. It’s important to take into account that all-season is what this tire is designed for, and won’t be the best buy in any one of the seasons. Even so, this tire was not the all-season to test your luck in the winter with.

Based on our research, we can conclude the Kumho Solus KH16 tire is one decent option from Kumho within its price range. From the data and user experiences that we have gathered for this review, it is suggested that this tire will serve drivers best on dry and wet pavement.

After long periods of use of this tire, we found that Kumho Solus KH16 has a great steering response and creates a solid, smooth, and comfortable experience while driving—its strength.

In its higher miles, the already high level of noise increased, and so did its performance as the treads wore. Though it is also important to note that this is the nature of most tires.

Our research also shows that though this is an all-season tire that should be adaptable from summer to winter, the grip, braking, and acceleration in snowfall are inferior to most all-season competitors.

Overall, the Kumho Solus KH16 doesn’t outperform more expensive tires in its class, but within its price range as an OE tire, it’s not your worst option. We think you will have a satisfactory ride with the Kumho Solus KH16, and we hope you enjoyed the review.