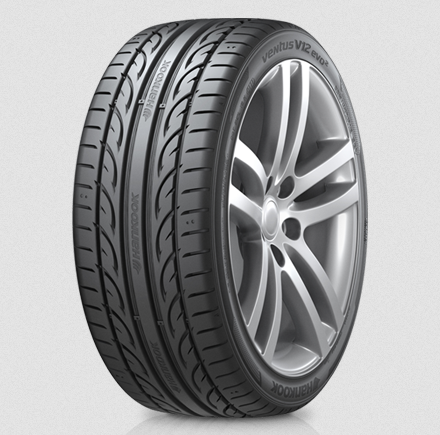 This is a review of the Ventus V12 Evo2 from Hankook.

It contains unbiased information about the Ventus V12 Evo2. This information includes manufacturers’ stats, users reviews, and experts’ thoughts based on drive tests. We hope it helps you decide if this tire is the right fit for your vehicle.

Based on our research we can conclude that the Ventus V12 Evo2 is an excellent option for spirited drivers. They stick well to the road in dry and wet conditions and can be used in streets, highways, and occasional track driving. However, the performance comes with the cost of durability.

In this Hankook Ventus V12 Evo2 review, we’ll analyze the tire’s grip in wet and dry conditions, handling, and steering responsiveness. You will also find out the available sizes, vehicles built for, and prices.

So, keep reading as we elaborate more about the Hankook Ventus V12 Evo2.

The Ventus V12 Evo2 is a good option for drivers who want to experience true sportiness.  It sits as number 14 among 33 tires in its category. They have excellent road grip in the dry and hold well in wet conditions.

Hankook Ventus V12 Evo2 is designed for drivers of sports cars, sports coupes, and performance sedans. According to users, the tire is affordable for drivers who want a sporty drive. Moreover, they were designed to give better fuel economy.

According to reviewers, the tires perform excellently in wet conditions and grip the road well. Users who went through thunderstorms with these tires had no issue. Wet traction was great, and the tires kept him in control of the car – thanks to the circumferential groove that helps channel water from the center patch to resist hydroplaning, and the aqua jet grooves that help improve wet traction.

However, some users say the tires are terrible in the wet. They noted the tires do not grip well in heavy rain and have high tendencies to hydroplane. Following other reviews, a user established that most tires experience hydroplane after 50mph on rainy days.

As such, drivers should apply caution when driving on these tires. They take time to recover from a slip, and this time will determine if you will get home safely or savage your car. Another user noted that he only hydroplaned when the tires had reached their tread bar.

According to reviewers, the tires have an impressive grip on dry roads. Thanks to the notched shoulders and continuous center rib that helps improve dry traction.

However, a user noted that driving aggressively on these tires causes the front tires to slip, especially on uneven terrains.

Users or tirerack.com didn’t give information about the Ventus V12 Evo2 on snow.  But it is a norm that summer tires cannot withstand extreme temperatures. So it should not be driven in any cold conditions through snow or ice.

The Ventus V12 Evo2 has an impressive wet and dry braking distance, but not as swift as the Continental ExtremeContact DW in both dry and wet conditions.

The tires are very responsive, according to some users, though some users say lack of response is felt occasionally. Nonetheless, according to tirerack.com test, the Continental ExtremeContact DW had a better steering response on wet roads while the Bridgestone Potenza S-04 Pole Position excels here on dry roads.

Users’ reviews revealed the tires are great in corners. They hook well in corners, though one must be careful in the rain. However, other users say they lose traction when cornering.

Another user stated that, although the tires were great in corners, he felt a lack of steering response at one point. And according to tirerack.com comparison test, the Bridgestone Potenza S-04 Pole Position handles better than all tires used in the test.

The tires, according to users, are fairly quiet, at least tolerable. Thanks to the grooves in the intermediate blocks featuring stealth technology and the wingtip design that helps reduce noise.

However, users say when they are hot, they howl in corners.

Truly the tires give a comfortable ride. They are stable with a good steering feel. However, most users complained of feeling every road imperfections, which means the tire’s tread is weak in absorbing shock or bumps.

Tiretrack.com comparison test revealed that Continental ExtremeContact DW has a better ride and noise quality amongst the four tires used in the test.

The Ventus V12 Evo2 does not come with a mileage warranty. But that’s not surprising for a summer tire; most of them don’t have. Some users, however, were not pleased with the tread wear. They complained of uneven tread wear and tires wearing too fast.

Some got only 13k miles before they needed to change tires. Others got 8k and some 20k miles. Short lifespan, however, is something common with summer tires because of the soft tread compound used.

One user noted that at only 4k miles, one of his tires had developed a bulge on its sidewall. Dealer says it’s an effect of potholes, though this user says the road he drives through had no potholes.

According to other users, the tires cannot absorb road shocks. This has led to punctured tires or discomfort. One user who had gone through just one pothole complained of a bubble appearing on the tire’s sidewall also.

However, for others, it was a good one. Some of them got within 30-35k miles.  And to them, they got good mileage owning to the fact the tires are performance tires. Another user who had put in 35k miles stated the tires have great longevity and would repurchase them if not discontinued by Hankook. For a performance tire? It’s a plus, he said.

The Ventus V12 Evo2 has a starting price of $120, with the largest sold for $307. According to users, the tires are good value for the price. However, users wished the tires lasted longer.

Other important things to note

A common complaint amongst many users is the issue of flat spots. Most users say leaving the tires to sit overnight or 24 hours resulted in flat spots. And the most annoying part is how long you’ll have to drive to get rid of it. Some said it took them driving for about 9 miles to get it out.

And if it sits for up to 8 days, it takes them 40 miles to get rid of the flat spots. For others, it took them 15-20 miles to eliminate flat spots after letting tires sit for five days.

Users also note the tires had great dry and wet traction until they wear to an extent. One pointed out that the tires, after 50% of wear, slide and let him lose control, requiring him to pay constant attention. It was terrible that his passengers commented on how he was weaving on the road. Worse, the tires were just 8k miles.

Users also said the tires heat up quickly, especially the front tires, if your engine produces much heat. To keep up, this user keeps the pressure for the front tire 1-2 psi lower than the manufacturer recommended pressure level.

The  Ventus V12 Evo2 is a good one from Hankook. It has a combination of a good balance of quality and performance. It performs well in the dry and adequately in wet conditions with care. Not better than some of its competitors, but for the price, the tire is solid.

Users were impressed with its performance, noting they are worth the price compared to its competitors. However, some users promised never to re-purchase or recommend this tire, mainly because of the wear rate and flat spots. However, the tire got a recommendation score of 6.7 out of 10

According to tirerack.com comparison test, the Ventus V12 Evo2 is an excellent tire for drivers who want to feel a sporty tire. However, they suggested that  Hankook should improve on wet traction.  Other tires with great ability in the test include the Continental ExtremeContact DW, Bridgestone Potenza S-04 Pole Position, and the Pirelli P Zero Nero GT.

What set it apart from its competitor is its poor tread life and condition of flat spots.