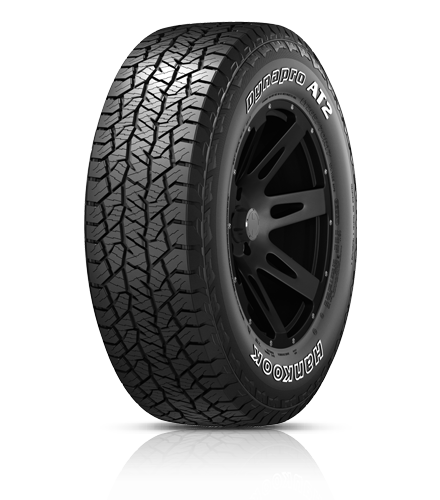 This is a review of the Dynapro AT2 from Hankook.

It’s aimed at showing you the capabilities of this tire. You know, knowing what tire to use for the right reason could make a big difference. The truth is, you could be using the best tire but not using it for the right purpose.

The Dynapro AT2 from Hankook is for drivers who desire performance and not overly aggressive driving on all road surfaces. The tires give so much confidence on the wheel and have durable tread. The Dynapro looks sophisticated and performs well in almost all climates. Don’t worry; it’s an affordable tire you might like.

So in this review, you get to learn what the Dynapro AT2 is. What conditions and road surface it can be driven in. How it performs on each road condition, the price, and how long it can serve you.

Keep reading to know more about the Dynapro AT2 tire.

The Dynapro AT2 stands as one of Hankook’s best tires. Amongst 28 tires in its class, this tire sits at number 17.  The Dynapro AT2 is an all-terrain tire and works for almost all climate conditions.

It is designed for drivers of pickup trucks, work vans, Jeeps, and SUVs who desire performance and durability. And are stock tires for cars like the 2016 Ford 150 4WD The Hankook Dynapro AT2 seems like a low-budget tire until you opt for larger sizes.

The Dynapro AT2 performs differently on different car terrains under wet conditions. Most Hankook Dynapro AT2 reviews state that the tire slides on wet highways.  Hence losing much traction and grip. Plus, they also slip while accelerating in the rain.

However, for others, traction and grip on wet highways were average. Thanks to the high-dispersible silica in the tread compound that helps improve wet traction with the wide grooves and open shoulders  constantly removing water from the tire

Few users also noted that they only get to experience slips in wet Conditions when the tires are worn down. Say around 50k miles.

In contrast, on wet offroad, the tire has excellent traction and cuts through hydroplanes at ease. While few reviews complained of little traction on wet offroad, the majority of owners were impressed with wet traction off-road. It’s also noteworthy that these tires are not mud tires. So most times, they lose traction, pack up and force drivers into using a 4WD.

The tire also behaves differently on different terrains under dry conditions. In fact, most of the tire’s strength was seen in the dry on and off roads. Thanks to the independent tread block that creates extra biting edges for grip on off-road. Most reviewers said it performed decently on dry roads and with excellent traction.

On dirt roads, many users commended the ability of this tire. They noted that even if it’s not a dedicated off-road tire, it does hold up pretty well. Although not as sophisticated as the Yokohama Geolander A/T G015. Reviews also show that the Dynapro AT2 tread picks up rocks and dirt around. But that’s what most AT tires do anyway.

However, other reviewers noted that the tires do not grab well on snowy highways. It doesn’t allow them through snow, especially on FWD. Noting that the tire’s inability to sail through snow forces them into using the AWD. However, few attest that the tires performed considerably on snow highways with little wheel spin.

Many Hankook Dynapro AT2 reviews noted that the tires had an amazing performance in the snow on offroads. And can cut through a 6-inch plow of snow. For a few, it was a no. So it could be that the vehicle in use has a significant role in how these tires behave on snow, both on-road and offroad.

It performed decently on ice, too, especially at low speeds. Although not as tame as the BFGoodrich all-terrain T/A KO2 when accelerating in the snow. This is an all-terrain and not all-season tire, so most didn’t expect much from here. However, if you live in regions that experience winter, you may need a dedicated snow or winter tire to enjoy your ride.

On snow, the braking distance is fair and better on ice, according to tiretrack.com test results. However, the BFGoodrich all-terrain T/A KO2 was far ahead of it.

The Dynapro AT2 is made of a strong case that ensures tires gain stability even when on rough packs. To confirm this, many reviewers noted they could go through rocky roads without losing balance, even when the vehicle is loaded. Stability is swift on dry packs but a little discomfort on wet packs.

Few users also noted an increase in driving speed even if they couldn’t tell how fast they moved. This, however, caused a rise in fuel usage, especially when going with the bigger sizes, bigger than the vehicle’s weight. You would mostly notice an increase in MPG when doing city driving.

Most consumer reviews and tiretrack tests noted that because of immersed grip and traction on dry roads, the tires cut through bends effortlessly. Too, without losing balance. But in wet conditions, there is a reduction in the cornering force since traction is minimal. Putting Yokohama Geolander A/T on ahead of the Dynapro AT2.

Even if braking and turning were an issue on snow and icy roads, the tire seemed to keep the vehicle under control. However, not as good as the BF Goodrich tires.  Few with heavy-duty pick-up stated the steering felt mushy, and when quick turns are made, the vehicle rear wanders.

Many users stated that the tires were quiet, courtesy of the stepped block edges that prevent noise from stemming from the symmetric tread patterns. However, others noted the tires were very noisy.

But the confusion came when most of these users did not specify which road they were driving on. Or under what climate conditions the tires were quiet or noisy. Now see what others said.

Some noted that on highways, the tires are very noisy. For others, noise is almost unnoticeable on highways, except for little noises that pop on concrete surfaces at high speeds.

However, the tires were very quiet on off-road drives, but once above a certain speed, say 55mph, the noise becomes uncomfortable. Then at 70mph?  It’s almost insane and unbearable, strong enough to cause a headache.

Reviewers also noted that they only experience road noise when the tread is worn down. With the wear usually starting from the rear tires. They, however, may not even hear it with the radio on.

The ride is excellent, smooth, and firm a bit, especially on highways and city drives. Thanks to the tire shoulder’s stiff tie bars that help balance the tread blocks. Aiding ride comfort and dry handling.  Nevertheless, the Yokohama Geolander seems to provide better handling and balance both in wet and dry conditions.

However, some heavy-duty truck owners noted that wind gusts cause the vehicle to lose balance and shake. Quite scary, but this could be the picking an undersized tire.

The Hankook Dynapro AT2 comes with a 60,000 mileage tread warranty. A proof Hankook has confidence in the tire’s durability. However, Buyers get a half mileage warranty if rear tires are of different sizes.

Hankook ensures the tire is fitted with a durable three-ply casing to prevent puncture and damages during off-road drives. Hankook didn’t end there. The tire’s wide footprint evenly distributes pressure aiding in treadwear and even tear. To further improve durability and speed, the tire was fitted with two steel belts reinforced with two nylon cap plies.

This is not about Hankook, as buyers confirmed this through their reviews. Many were pleased with the tires’ durable tread life. And hoped to get to 60k miles before the tire finally wears out. However, other reviewers suggested that constant rotation makes the tire last longer. And advise users to this during an oil change.

Many users were pleased with the price of the Dynapro AT2, which starts at $133. Noting that the tire’s gorgeous looks and durable tread life really made it outstanding.

So far, the Dynapro AT2 is another power tire from Hankook. It is good and performs well, especially on dry roads. Not an all-season tire, but it performs decently on wet or snowy roads. Many users commended the tire’s durability and beauty, even if few complained of the tire not looking aggressive enough for an all-terrain tire.

Even if it doesn’t satisfy all climate needs, handling and performance are good, at least in favorable conditions. Most were happy with the tire’s performance and were willing to buy again. Giving a recommendation score of 6.7 out of 10.

However, tiretrack.com comparison test noted that they liked the light and spontaneous steering. And were also pleased with the decent snow traction. However, they would like to see improvement on wet grip as this is the only way it could compete with other tires in its class.

While it’s a good tire, it doesn’t excel in any area more than any tires in the test group. They concluded that it’s not the best but just a viable all-terrain alternative. The BFGoodrich All-terrain T/A KO2 and the Yokohama Geolandar AT G015 were better options in all driving conditions, according to the test.

But note that the prices of these tires differ. While the Dynapro AT2 starts at $133, the BFGoodrich and Yokohama Geolander starts at $170 and $150, respectively.

The tire is recommended by more than 60% of owners who wrote a review. They liked the tire immensely because of its durable tread and how well constructed it is.

Conclusively, the Dynapro AT2 is a good and long-lasting tire. However, for all-around traction, both on-road and offroad, the BF Goodrich and Yokohama Geolandar are better options. Goodrich takes the lead in snow and winter performance while Yokohama tops mostly in wet and dry conditions.