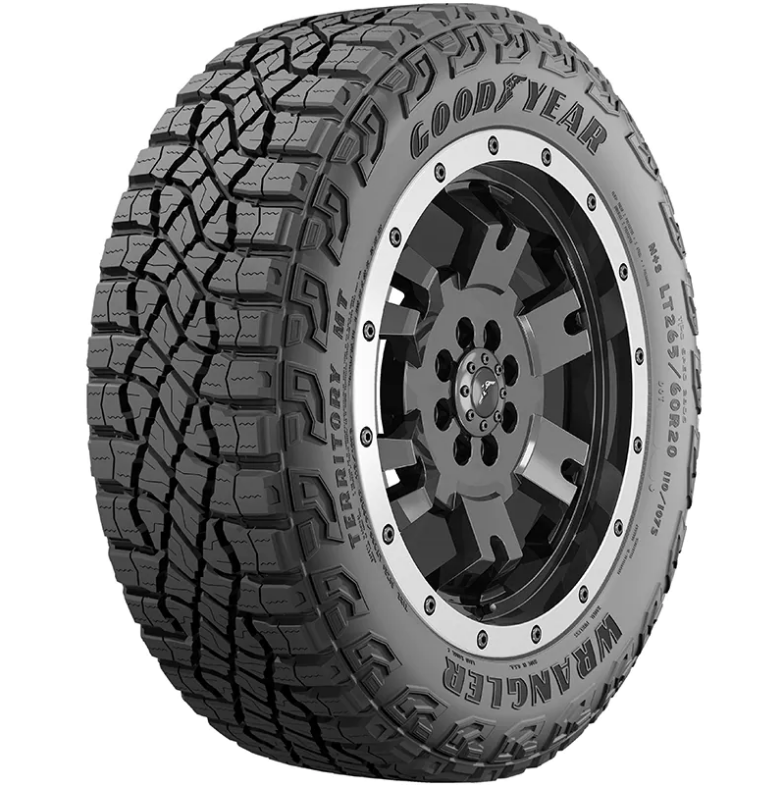 This is a review of the Goodyear Wrangler Territory M/T tire.

We have gathered customer reviews, performance tests, and tire features to determine whether Goodyear’s Wrangler Territory M/T tires are worth purchasing. Our review is unbiased and based solely on reviews, ratings, and performance tests.

This review discusses the tire’s features, benefits, durability, handling, noise level, and overall comfort. You will learn the pros and cons of the tire, how durable it is, and how well it performs in all weather conditions.

Our research concludes that the Goodyear Wrangler Territory M/T tire is not the best Wrangler tire for vehicle owners that do extreme off-roading, especially in snow or mud.

The durability of the tires and low noise level make it ideal for hybrid use, but performance shows that the tires do not have good traction in mud or snow, making it less than ideal for extreme off-roading vehicles.

Are you looking for an off-road tire for your frequent adventures? Dive into these features and performance levels on every type of terrain to see if the Wrangler Territory M/T is a good fit for your vehicle.

The Goodyear line is full of tires built for both on-road and off-road adventuring. The Goodyear Wrangler Territory M/T tire is an Original Equipment Mud-Terrain (MT) tire designed to give off-roaders excellent traction on any terrain.

This tire is for off-roading vehicles, pick-up trucks, or sports utility vehicles. The tire has an open tread design to clear mud and dirt, a maximum carry load of 2,535 lbs, and a sequenced pitch pattern to reduce on-road noise.

Many ratings and tests show that these tires perform exceptionally well in dry conditions but not in wet conditions. Reviews show that they also do not have good winter traction.

The tread pattern and wrap-around shoulder design are built to allow the tires to perform well in wet conditions.

The tire has a 4-star rating for wet traction. Reviews support the high rating and show that the tire performs decently in wet conditions. However, some customers pointed out that it didn’t feel like a true mud tire due to frequent slipping. Other users are unhappy with the way the tires perform even in light mud.

Rocky terrain and major roads are not a problem for this tire. Reviews and ratings show that the dry traction on these tires is better than average. Users also say that the handling on major roads and off-road is efficient.

Also, the cornering ability and steering for this tire are highly rated. Users say that the steering is responsive and the cornering is sharp on major roads.

The tire has a tread pattern designed to have good traction and grip in snow and ice. The tire even has extra shoulder blocks to handle deep snow. However, reviews of this tire show that it is not an ideal choice for drivers in snowy conditions.

One user test showed how the tire performed on his Bronco during slick snow and ice (at 35 psi). The user explains how well the steering and cornering are during the test drive. When the user tried to brake, the tires caused a bit of sliding and took a few seconds to come to a stop.

These mud-terrain tires were put to the test using Ford Broncos. The shoulder blocks were highly effective in scooping additional mud, dirt, and debris from the tires. The tires held up well during testing, and the asymmetric tread pattern and siping allowed the Broncos to climb up rocky terrain.

The drivers during the test reported no tire slipping and that the tires were able to hold their own out on the trails. However, other reviews say that the tires are not the best for extreme off-roading in muddy conditions. It performs well on dirt, but any terrain with water or mud does not serve the tires well.

User ratings, reviews, and tests were collected to show how well these tires perform in handling, steering, and turns.

Most Goodyear tires are built for comfort and performance. The Wrangler Territory tires are no exception and many user reviews say that the feel of these tires is soft and comfortable. The tires are lightweight compared to heavier brands and they absorb impact better than other off-road tires.

Reviews show that the major benefit of these tires is their comfort and feel on major roads. Users enjoy having a mud terrain tire that is not loud and responds well to handling.

The Wrangler Territory M/Ts are designated mud tires, meaning they have the initial reputation of being noisy on-road. The tread blocks are built at different angles to reduce road noise. However, most users report that the tires were quiet on the road.

The majority of users said that their mud-terrain tires had little noise on major roads. This wasn’t the case with every user. One specifically gave a low rating regarding the noise level, saying that the tires were very loud and high-pitched.

The previous test with the Broncos showed that an open tread design allowed for the tire to decrease the slap of the pavement on the tire, limiting the noise.

There is no tread life warranty for the Wrangler Territory M/T. According to reviews, the tread life does last and the tires seem to be durable even with different terrain. Tread life has a 4-star rating on Goodyear’s website with users saying that the tire has held up so far.

These tires are generally more expensive than most Goodyear tires. The average price ranges from $227 to $317 (or more) depending on where you buy them. Other tires are around the same price that performs better in every condition, including snow and mud.

Most users say that the tires are durable. However, one user reported that after only 120 miles, one of the tires blew out. Another user has been driving with their tires for over 1,000 miles and reports that it is still functioning well.

We do not recommend buying this tire if mud is the main type of terrain that they’ll be used for. Wrangler Territory M/T tires are labeled as mud tires, but it is more of an all-season tire (except in winter). Reviews and ratings show that it does not perform well in deep mud or snow and ice.

The price of these tires is a bit more expensive than others, but are durable according to reviews. However, if the main purpose is to go off-roading in mud, there are better options.

These tires are not recommended for off-roading enthusiasts based on reviews and ratings. Although one test found the dry traction to be sufficient, the overall performance on winter conditions and mud-terrain was poorer.

The Wrangler Trailrunner A/T and the Wrangler MT/R with Kelvar are recommended for all-terrain and all-season conditions. Both tires are cheaper than the Wrangler Territory M/T tire and have better ratings for traction, handling, and ride comfort. The Trailrunner even has a 55,000-mile tread life warranty.