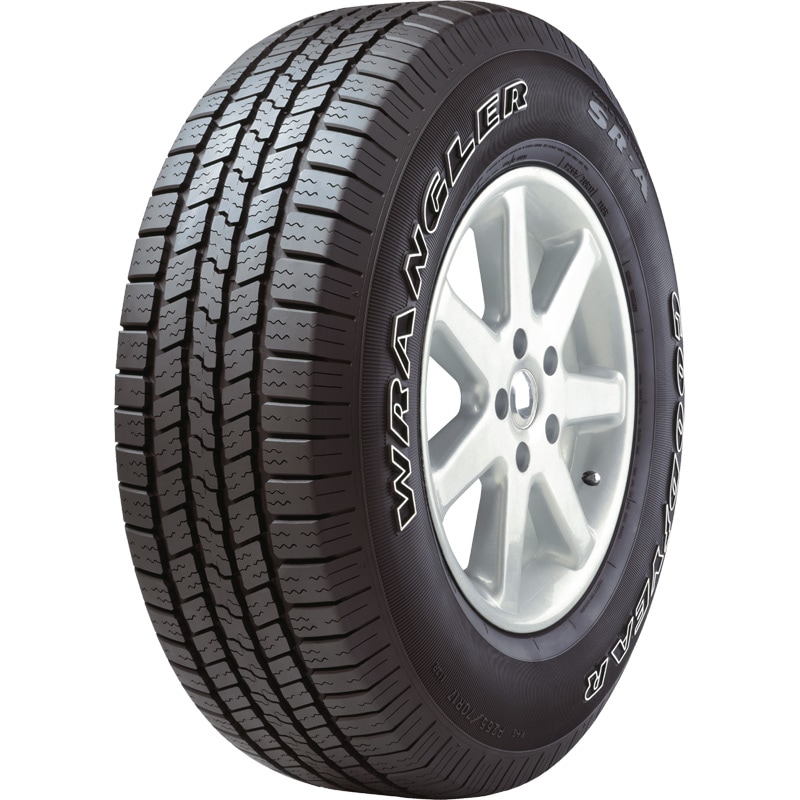 This is a review of the Wrangler SR-A from Goodyear.

It entails valuable information about the Wrangler SR-A. This article combines input from the manufacturer’s stats, real user reviews, and experts’ opinions based on drive tests. We hope you find it valuable.

Based on our research, we can say the Wrangler SR-A is ideal for those looking for all-around traction. The all-season tire is great in dry, wet, and considerable in snow, ice, and all paved road conditions. It is quiet, rides smoothly and handles well, and is a good fit for daily commute. The tire can be used by pick-up trucks, Crossover, and SUVs. It's perfect for highway driving and occasionally on track or off-road.

To know why we made such a conclusion, in this review, we’ll analyze the tire’s performance in dry, wet, snow, and ice. This includes its grip, traction, and handling. You’ll also learn about the tire’s durability, available sizes, and what vehicle it is made for.

Keep reading to find out more about the Wrangler SR-A from Goodyear.

Wrangler SR-A is one of Goodyear’s all-season tires built for absolute performance. And takes the 31st position amongst 45 tires in its category. The tire rides smoothly and helps reduce vibration and road noise while still maintaining traction. You will find them as original equipment on vehicles such as 2003/2004 Jeep Grand Cherokee, 2014 GMC Sierra 2500 HD 4WD crew cab, 2010 Jeep Patriot Sport, etc.

This all-season tire is made explicitly for highway driving but can be used occasionally on gravel roads. Built for durability, the Wrangler SR-A can be fitted into light pick trucks, Crossovers, and SUVs. While not cheap, it remains an affordable-seasons tire and comes in sizes 15, 16, 17, 18, and 20.

In wet conditions, these tires are great. Some reviewers said traction in water is awesome, and they felt glued to the road as they drove. Even while the road was slippery and oily due to heavy rain, the tire had enough grip. One user, however, suggested that on slippery roads, he used his 4WD system to get better traction.

The tires could be used on the beach if aired down a bit. Another user noted that these tires at 80mph during a heavy downpour on highways were exceptional. Thanks to the wide circumferential grooves that expel water from the tire to enhance wet traction. The Shoulders also house the self-cleaning lateral groove that helps remove mud from tires for traction on muddy roads.

However, on wet roads, some users say they were afraid to drive as the tire hydroplaned at ease. One said that his rear tires easily lost traction. While some had traction issues during the beginning of tire life, some experienced traction loss as they wore out. Since the tires lacked traction even to start the vehicle, some were forced to call tow trucks to tow their vehicles from their garage; this, they found embarrassing.

The tires, according to reviewers, were excellent in dry conditions. Traction is incredible, they said. The tires could go through dirt and gravel roads yet retained grip and traction. A reviewer noted that on many challenging off-road, these tires provided enough grip.

On the other hand, some users said the tires easily lost traction on dry pavement. Some attested that even on loose dirt, these tires spin. According to users, these tires are dangerous. It was, however, never intended for off road drive though it can be used occasionally. If you commute mostly offroad, you may need an all-terrain tire instead.

According to users’ reviews, the tires can pull through snow excellently. Thanks to the circumferential groove and multiple zigzag sipes that help improve snow traction. But while the tires are good on snow, Goodyear only recommended it for light snow. So if you constantly commute in snow and ice, do get a dedicated winter or snow tire.

For others, this was different. Many note that the tires were slippery on snow.  Even on the slightest layer of snow, these tires were outrightly dangerous. On ice, forget it, a user reiterated that the tires would also slide. Another user said as the tires slipped, he lost control and damaged sheet metal in front of his truck that cost him $3,500 to repair.

The Wrangler SR-A has an excellent stopping distance but is more favorable to those with AWD/4WD. According to a user. His 4WD and the tires made stopping on wet, oily pavement fast and easy. However, some reviewers noted that the tires had poor braking traction – thus, taking them longer to stop.

The Wrangler SR-A handles were swift but were more favorable to those on 4WD/AWD. According to users, they are smooth in turns both in wet, dry, or snow conditions. However, other reviewers noted the tires are not good in corners as they quickly lose traction.

The tires, according to most users, are very quiet and rides smoothly. This gave many so much ride comfort. However, some said the tires ride rough and had a lot of road noise and vibration throughout the tire’s life.

The Wrangler SR-A has a six-year or 50k mileage warranty for P Metric sizes.  This was supposed to keep users happy. However, many complained the tires didn’t live long. Most of these users got between 8k-28k miles; a few got up to 41 miles. While some admitted that they didn’t rotate or balance theirs, others noted that even with constant rotation, the tire still didn’t last.

A user also stated that after putting in only 8k miles, chunks started falling off the tire. Few others had broken steel belts, which some said occurred only after 5k miles. Another reviewer noted he had had seven flat tires, all related to poor manufacturing. The tire’s soft sidewalls also contributed to its short life. For these users, the tires aren’t supposed to be used as OEM for their expensive vehicles since they’re of inferior quality.

While many complained over the tire’s short tread life, some got a lot of miles from them. Some got up to 45k, others 60k, 66k, but the highest recorded by users was 85k miles. These reviewers, however, noted that the secret to having a longer tread life is constant rotation and checking the tire pressure. Some carried out rotation every oil change(between 6-15k miles) while also checking their tire pressure weekly or monthly and airing them when needed.

In fact, a user who had driven on snow and dunes stated that the tire wore evenly over time. To express how durable these tires are, a user said he had driven through gravels, portholes, and even harsh snow. Yet the tire’s tread was intact. This driver already had 85k when he wrote this review.

The Wrangler SR-A starts at $118, with the largest size sold for $235. The tire’s quality to the price point was a good match for many. For some, while they cost less, they are pure garbage. Many users said the price compared to durability was great. However, some said they expected the tires to last as promised by Goodyear.

From users’ reviews, we realized that owners who got a lot of miles from the tire were mostly average and easy-going drivers. Though the tires can get the job done, it is not a performance tire.

Additionally, many of them were treating an all-season tire like an all-terrain tire.

If you have problems with durability, it could be balance issues, alignment out of spec, pushing it too hard, or frequently driving in snow or tough terrains.

Goodyear recommended them for light pick-up trucks, yet they were fitted as factory tires to 3/4 Denali diesel trucks.

On the right vehicles, these tires are exceptional for towing. A user noted it turned his 2010 Suburban into a pulling beast.

The Wrangler SR-A is an ok tire for users who want performance without breaking the bank. They are excellent in dry, wet, and light snow conditions. It rides quietly, smoothly, and handles well. A perfect fit for daily commute with a good price point.

Many reviewers were unhappy with the tire’s performance, noting not to purchase it again. In fact, some, because of the disappointment of the Wrangler SR-A, vowed never to buy any of Goodyear’s tires. Some got their money’s worth, stating the tires are worth the cost and highly recommended. The tires, however, got a recommendation score of 3.6 out of 10.

While the Wrangler SR-A is a great tire, it is not the best out there. But the thing is, you do get what you pay for. Other great highway all-season tires include the Firestone Destination LE3, Michelin Agilis CrossClimate, and Continental TerrainContact H/T

The Wrangler SR-A is a good tire, and we will recommend it. They are quiet, durable, and ride decently, providing road comfort.

They are suitable for daily commute in wet, dry, and light snow conditions. But better options you can try are Firestone Destination LE3, Michelin Agilis CrossClimate, and Continental TerrainContact H/T.

The very thing that takes the tire down is that many were fitted to the wrong vehicles and used on unsuitable terrain. Otherwise, it should have matched most of its competitors.