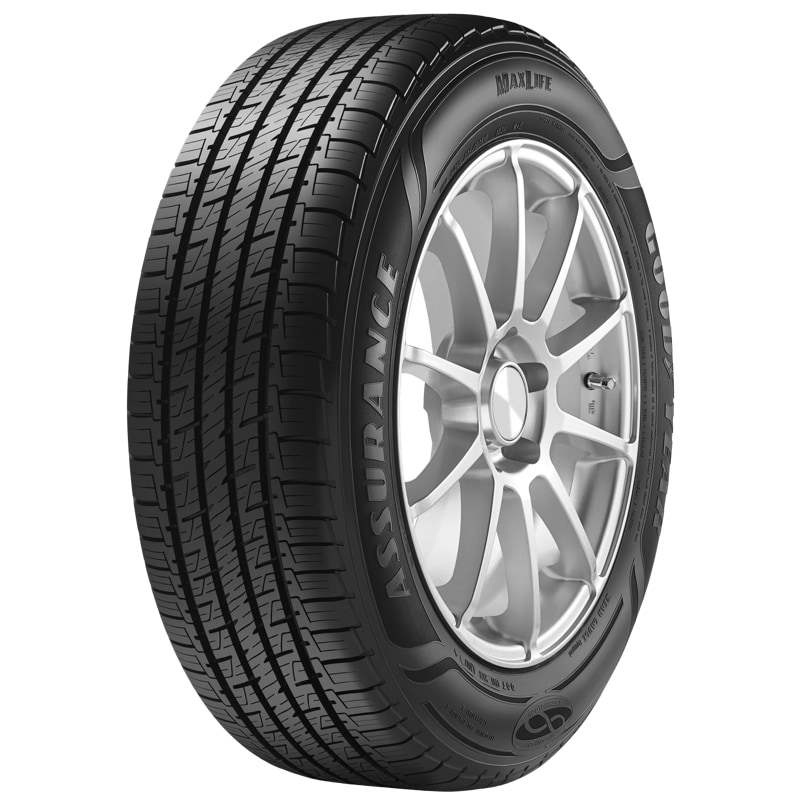 This is the review of the Goodyear Assurance MaxLife tire.

It contains the most information about the Assurance MaxLife tire from Goodyear. The content of this review is reliable as we have carefully researched the manufacturer’s stats, real owners reviews, and experts’ opinions based on drive tests. We hope you find it helpful in your next tire purchase.

The Assurance MaxLife is an excellent choice for drivers who desire all-year-round traction. The tire has excellent grip, is responsive, quiet, rides smoothly, handles well, and is durable.

It is best suited for Sedans, Minivans, Crossovers, and Coupes. It can be driven on track, in the city, on highways, and occasionally off-road. While it works for daily commuters, it might disappoint spirited drivers.

So in this review, we will analyze the tire’s performance in all climates. This includes its grip and traction, and handling in dry, wet, and winter conditions. You also get to know the price, available sizes, durability, and cars it’s built for.

Keep reading as we unveil more about the Assurance MaxLife.

The Assurance MaxLife is one of Goodyears’ touring all-season tires. And sits at number 1 among 17 tires in its category. It is designed to provide excellent ride and traction in all climates. The tires help improve fuel mileage and are built to last.

It is suited for sedans, Crossovers, Minivans, and Coupes and sizes 15 to 20. Though it’s not a low-budget tire, it is an affordable option for those looking for all-season traction.

The tires did well in the rain, according to reviewers. Most users said the tires grip excellently in the rain giving them confidence. Thanks to semi-closed shoulders that provide block edges for grip in wet weather. The circumferential grooves also account for hydroplane resistance as it helps evacuate water from the tire.

However, a user who had put in 1k miles said he had once hit a puddle on the highway and hydroplaned a bit. Other users say the tires do not inspire confidence in wet conditions. They find it challenging to go through deep water and find the tires hydroplaning and swerving.

For some, to go through the rain, they will need to slow down more than they would usually do as the tire does not grip well in inclement weather. Even in light rain, users say they spin when moving from a stop sign.

According to most users, the tire’s performance in dry conditions is incredible. Reviewers noted that the tires had good dry traction and kept their vehicles pinned to the ground. Thanks to the continuous center ribs that keeps the tire in steady contact with the road

The tires, according to users, provide a reasonable amount of snow traction. Some had used it on 3 inches of fresh snow and had no problem. In fact, some users said snow traction though not perfect, is better than wet traction.

However, according to other reviews, the tires often provide little traction and sometimes no traction. But it is worth noting that even if this tire can be used in snow, it can never function as a true snow tire

According to users, the Assurance MaxLife tire brakes impressively on dry roads. And according to tirerack.com comparison test, the tire excelled in dry braking compared to other tires in the test.

However,  users said that during medium or heavy braking on wet pavement, they spin and slide easily. Confirming this, tirerack.com revealed that the Continental TrueContact Tour has a shorter wet braking distance than all tires in the comparison test. The tires were also noted to slide when braking in the snow (whether medium or heavy braking)

The Goodyear Assurance handles well in all climates. The tirerack.com comparison test, however, revealed that the Michelin Defender T+H handles better than the Goodyear assurance and other tires in the test.

Nonetheless, users say the tires can go through corners in dry conditions even if the turn is made too quickly, thus, inspiring confidence. Putting the Goodyear on top as the tire with better dry cornering traction, according to tirerack.com comparison test.

For others, the tires take away their confidence in wet weather as they will need to slow down than usual when taking corners on wet roads. Here, tirerack.com comparison test revealed that the Continental TrueContact Tour has better wet cornering traction than all tires in the test.

The tires, according to reviewers, are not loud. Users say the tires are quiet when driving in the city or highway. Even on patch roads made of concrete which naturally makes tires scream, a user said, the tires were quiet. On new pavements, they are totally quiet.

The tires ride well and smoothly; users say they felt comfortable in them. However, according to tirerack.com test, the Yokohama AVID Ascend LX had better ride quality while the Continental TrueContact Tour had better noise comfort.

For others, there was noticeable road noise (though not horrible). Few reviewers also noted the tires were noisy initially but got better as they continued driving them. Some said they could feel every bump on the road which sort of took away their comfort

The Assurance MaxLife comes with a six-year or 85k mileage warranty. This however had kept users’ hopes high on longevity. Many said the tire wore pretty well and were very happy with the tires. But for a few, it was different.

Very few reviewers said the tires wore too fast, stating their disappointment in the tire. A user stated that at only 15k miles, tires built to last for 85k miles were due for a change.

The Assurance MaxLife has a starting price of $133, with the biggest size sold for $232. Many reviewers were impressed with the price point coupled with its performance. Users say the tires wear decently and from the present condition would reach the expected life span. They attest that the tire’s durability is worth the price.

As regard gas usage, some users said they had a drop in mpg. However, others say they didn’t notice any reduction in mpg.

Going by users’ reviews, one thing we noticed about people who complained of fast wear was that these people were spirited drivers.

The tires do not do well when driven aggressively. Easy-going and average drivers were those who put in a lot of miles. For example, an easy-going driver at the time of review had 50k miles already and is still using them.

The Assurance MaxLife is a good tire for everyday commute. They have excellent grip and traction, handle well, are quiet, and are very durable. The downside is, it is not a good tire for spirited driving. But in a nutshell, the tire is worth the price.

Many were happy with the tires, especially for the price point. Few complained of the tire’s durability and performance in inclement weather, stating their disappointment. While some opted never to rebuy it, most loved the tires. The tire, however, gained a recommendation score of 8.6 out of 10.

While the Assurance MaxLife is the best in its category, tirerack test reveals it doesn’t excel in all weather. Some tires in the test had some peculiarity. Good examples are the Continental TrueContact Tour, Michelin Defender T+H, and Yokohama AVID Ascend LX.

The Assurance MaxLife are great tires, and we highly recommend them. They are quiet, drive smoothly, handle well, and provide good traction in rain and dry conditions. This all-season tire is great for commuter drivers, but if you drive spiritedly, you may look elsewhere.

However, other options which have proven to be great touring all-season tire includes the Continental TrueContact Tour, Michelin Defender T+H, and Yokohama AVID Ascend LX. Nonetheless, what sets this tire apart from its competitors is its price point with incredible wear and awesome dry and wet traction.