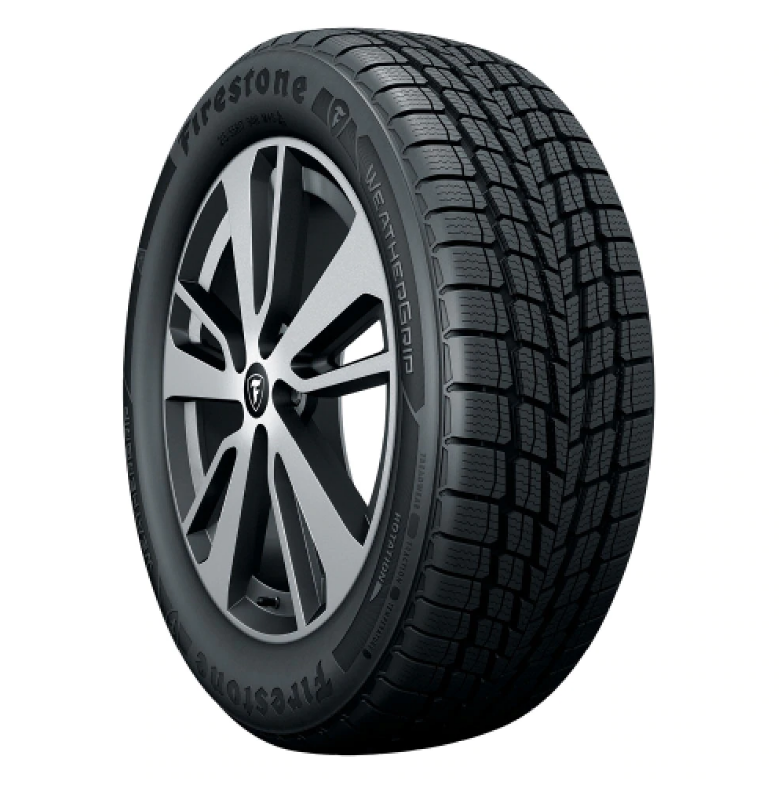 This is a review of the Firestone WeatherGrip.

It entails well-researched information about the WeatherGrip tire from Firestone. And yes! You can rely on every content you see here. All information is gotten from real owners’ reviews, manufacturers’ stats, and experts’ opinions based on drive tests.

According to our research, the Firestone WeatherGrip tire is a decent all-year-round tire. It works effectively on dry, wet, snow, and icy roads. Noise is low, rides smoothly, and increases gas mileage. However, it's noisy on highways, and performance comes with the cost of longevity.

So in this Firestone WeatherGrip review, we will analyze the tire’s traction and noise level on dry, wet, snow, and icy roads. You would also see how durable it is and the cost of this tire.

So keep reading as we uncover more about the WeatherGrip tire from Firestone.

The Firestone WeatherGrip is built to provide exceptional grip and traction all year round. It occupies the 8th position amongst 56 tires in its category. They are quiet, have incredible road grip, and are comfortable to drive. Users say they can take you through all seasons without leaving you stuck in the ditch. The tire has the three-peak snow symbol, making it a perfect snow tire.

They are best suited for drivers of coupes, family sedans, station wagons, and crossovers. They are built to last long as it comes with a mileage warranty. They are not cheap tires but affordable for drivers who want daily ride comfort and traction all season.

Wet traction, according to users, is excellent, stating that there are no issues with hydroplaning. The tires can cut through standing water because of the full-depth grooves that constantly channel water away from the tire. The hydro grip technology also aids in resisting hydroplanes.

Users say they can also go through wet paved, slick, or muddy roads. Thanks to the interlocking grooves that create biting edges to improve performance in slippery conditions.

However, as the tire ages, wet traction becomes horrible and scary. Most users around 17-24k miles had started experiencing traction loss.

According to users, the tires provide impressive dry traction. They can go through dirt roads exposed to sharp objects or rocks without compromising traction. However, users said they experience a slight reduction in acceleration on dry roads.

According to reviewers, the tire provides enough traction on snow and slush. Not surprising for a tire branded with the 3-peak snow symbol. Taking off from a stopping point is never an issue. According to some users, their experience as drivers made it easier and safe for them to go through snow and ice on these tires. The tires can go through 6-8 inches of snow and slick ice effortlessly.

One user said the tread’s siping helped in snow traction.  On the other hand, some users said they experienced a bit of traction loss on deep snow. On ice, as long as you move continuously, you’re good; stopping on an icy hill was troublesome for this driver to continue. However, users generally noted that the tires become scary in snow as they age, usually around 17-24k miles.

Some users were not pleased with their performance on ice. According to one user, the tread compound is not suited for ice. And as such, it doesn’t provide ice traction. This brought this user to conclude that even though the tires had a tread design like a winter tire, the tread compound is like every other all-season tire.

Nonetheless, it is worthy to note that, even if the tire sports the three-peak brand, it can never perform as a true snow tire. So if you constantly drive through snow regions, getting a dedicated snow tire will help with performance and tread life.

According to users, braking on these tires is impressive. Even when braking on slick, hardpack snow, the traction was excellent, and you don’t need to engage the ABS.

Some owners said the tires allow them effortlessly go through roads, keeping them in full control of their cars. Though some users say, the steering feels heavy like a dedicated winter tire. This confirms tirerack.com comparison test, which noted that the General AltiMAX 365 AW has better steering responsiveness in both wet and dry conditions.

The tires corners excellently. It gives incredible cornering traction in dry, wet, and snow conditions. However, it is not as smooth as the General AltiMAX 365 AW in dry conditions, according to tirerack.com comparison test.

Confirming this, users say the tires slightly delay in turns. But on wet roads, the Firestone WeatherGrip has better cornering force and traction than the General AltiMAX 365 AW.

The noise level of the Firestone WeatherGrip is low, and as users would say, it is more than acceptable. However, few users said they noticed increased noise on highways and dry conditions.  For most users, it was different; most users complained that the tires get noisier as they wear down.

According to users, the tires give a smooth and comfortable ride. Thanks to the chamfered shoulder blocks that keep tires in steady contact with the road. However, tirerack.com comparison test states that in terms of noise comfort, Firestone WeatherGrip does not match the quietness of General AltiMAX 365 AW.

The Firestone WeatherGrip comes with a 65k or five years mileage warranty. And users get half mileage for rear tires if they differ in size from front tires. But most users said the tires never lived up to their expectations or promised mileage. The highest some users put in was about 17k miles, and the tire has worn down to change.

Another set of reviewers complained that the tires do not leave up to the warranty when used only on snow. The highest they could go was one year, even when they put just 15k miles yearly. That said, it is essential to note that, while this tire has the three-peak snow symbol, which indicates its activeness on snow, it can never function as a true snow tire.

Constant use in snow or harsher conditions will make them wear faster even if they perform excellently. So if you constantly plow on snow, do get a dedicated snow tire.

The Firestone WeatherGrip has a starting price of $108 and goes up to $215 for the largest size. Users say the tire’s quality is worth the price point. However, for durability, they wished Firestone could make the tread compound last longer.

According to users, using this tire helped increase gas mileage by a few miles per gallon. An Uber driver even said the tires had made more money for them. The reason is, as a driver who hauls people, he moves when other drivers sit at home during severe weather.

The WeatherGrip is an excellent tire from Firestone. The tire is a fantastic tire for those who want safer snow driving but don’t need a dedicated snow tire. They are also great on wet and dry roads with minimal road noise. The tire, therefore, is a good bang for the buck.

According to tirerack.com reviews, most users were highly pleased with the tire’s performance in all seasons. Plus, the price point was really encouraging, they said. Even with short tread life, most of them said they would make a repurchase. The tire, in the end, gained a great recommendation score of 8.4 out of 10.

However, according to tirerack.com comparison test, the Firestone WeatherGrip is not an outstanding tire. There are better options in its category one could pick. They include General AltiMAX 365 AW, Vredestein Quatrac, and the Yokohama AVID Ascend GT.

The Firestone WeatherGrip is a great tire, and we highly recommend it. The tires had lived up to their name. They handle harsh weather incredibly, stable enough on dry roads, with minimal road noise. However, performance decreases as tires age.  So, if you can sacrifice longevity for performance, this is a perfect all-weather tire.

True, special conditions call for special tires, but this tire can handle all weather effectively. The only weakness of the Firestone WeatherGrip is the ability to live up to life expectancy.