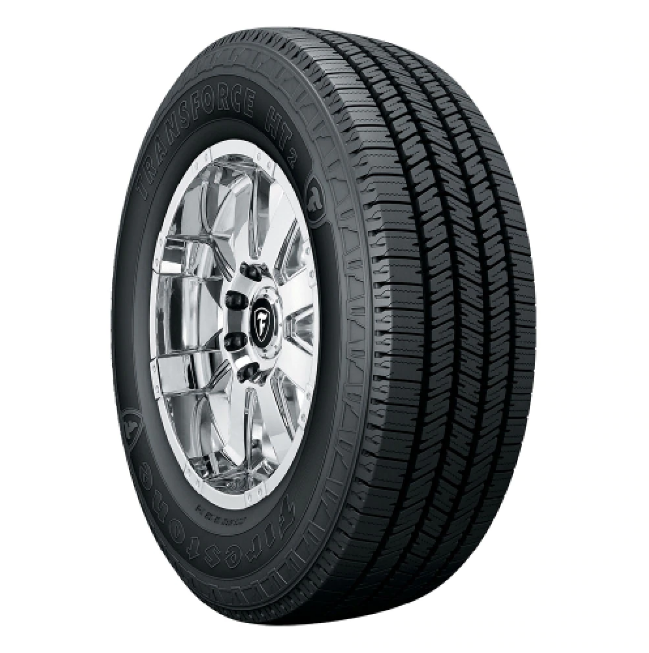 This is a review of Firestone Transforce HT2 tires to help you decide if they are the right option for your vehicle.

We researched everything from Firestone’s specifications to how the Transforce HT2s performed on the road. Then, we took our findings and compared them with customer reviews to provide you with a comprehensive report on how the tires perform.

Based on our research, the Firestone Transforce HT2 is a middle-tier all-season tire for commercial vans, SUVs, and trucks that clock a lot of highway miles. It’s dependable in most weather conditions, though wet grass can be a challenge. Deep, dense snow is sometimes a struggle, but not impossible for these tires.

Are you curious about specifics and how we reached our conclusions? Read on to take a deep dive into specs, tests, and more. To make things easier, we divided the article into three sections:

If you’re ready to learn everything you need to know about Firestone Transforce HT2 tires, let’s take a ride!

Firestone’s Transforce HT2 tire is meant for light to medium trucks, SUVs, and vans that see a lot of highway miles. It’s an all-weather tire with decent traction and is designed to provide a comfortable ride.

This tire is a mid-level option in terms of price and wear for commercial vehicles that carry heavy loads year-round.

The Transforce HT2 serves as an update on the Firestone HT. The HT2 aims to correct the shortcomings, especially with better traction.

Firestone notes that the Transforce HT2 provides dependable traction in wet conditions and can reduce the chances of hydroplaning compared to its predecessor.

Let’s break down the separate components we researched and used to evaluate the Transforce HT2. We focused on several categories to provide a comprehensive review.

The Transforce HT2 offers decent overall performance and seems to be a genuine upgrade of the HT. Though there hasn’t been a road test for this tire, there is plenty of user feedback to provide a clear picture of what to expect.

Most users applaud the performance for long hauls on the highway, especially when towing a load. Some of the less than satisfied users seem to have issues with the lack of off-roading capabilities, even though these tires are clearly marked and advertised for highway use.

Additionally, Firestone notes that one of the top qualities of this tire is the fuel efficiency, which seems to be supported by user data. Given that the Transforce HT2 is a highway tire, that’s not surprising.

The one overall complaint is that the Transforce HT2s don’t last as long as people would like, but that doesn’t seem to be too much of a setback. Several users report repurchasing the same style several times.

Firestone designed the Transforce HT2 as an improvement on the HTs, primarily with regard to wet road performance. The tread pattern is symmetrical and features four grooves to direct water away for better traction.

This design was intentional as a way to reduce a driver’s risk of hydroplaning without creating a rougher ride on dry roads.

Of note, these tires were not designed for off-roading, and that includes grass. A few users noted that the wet traction abilities do not translate to saturated lawns.

One of the primary selling points for this tire that keeps it popular is the consistent performance on wet or dry roads.

Firestone designed the Transforce HT2s to handle smoothly and comfortably regardless, so it’s no surprise that the dry performance ratings are high across the board.

Snowy roads are more challenging than rain because the accumulation can vary. The Transforce HT2s should handle light snow much like a rainy highway route.

However, when the snow gets dense or packed with ice, all bets are off.

Firestone notes that the Transforce HT2 should perform well in ice and snow. However, the company also rates ice and snow performance lower than dry and wet performance for this tire.

Given that these tires are meant for highway driving and hauling, it should be no surprise that they handle well.

They are reinforced in all the right places and feature notched shoulders for smooth turns in most conditions.

Firestone built in their noise-reduction technology to limit road noise, even on the highway.

Most users agree that the Transforce HT2 provides a quiet comfortable ride, provided you stick to the highway and avoid off-roading.

Durability seems to be the main point of contention with these tires. Several users note that the tread life leaves something to be desired, but some indicate that they don’t mind the shorter life span.

Of note, Firestone offers a 90-day “buy and try” warranty on the tires. However, there is no limited mileage warranty.

The price is right in terms of quality and durability. It’s not a high-end tire, so it doesn’t come with a lofty price tag.

That said, with regular rotations and typical highway use, most drivers should get their money’s worth in the Transforce HT2.

That’s a lot of information to process, but we’ll sum it up nice and neat!

The Firestone Transforce HT2 is one of the most popular highway tires for commercial vehicles. It scores well with customers in terms of comfort and noise reduction, which bodes well for longer hauls.

A few user complaints seem to relate to using the tires incorrectly, primarily off-roading. For those users who stick to highway driving, the Transforce HT2 performs well in most weather conditions making them a dependable year-round tire.

Firestone Transforce HT2 falls around the middle of the class in price because the tread life isn’t as good as expected. However, that doesn’t mean the tire isn’t worth the money because it delivers impressive performance when used properly.

Based on the research, data, and user feedback detailed in this Firestone Transforce HT2 review, these tires are ideal for light to medium commercial vehicles dedicated to highway driving.

There are only two drawbacks with these tires, and one is a matter of opinion. First, they won’t fare as well with mud, wet grass, or deep, dense snow. Second, the tread life might not be as long as some of the others in the class.

The Transforce HT2s feature impressive tread systems that cut through water to reduce the risk of hydroplaning. They offer a quiet, comfortable ride, even when towing a load, which is especially nice for long hauls. The price is just right for a commercial vehicle, especially if you can snag a promotion.