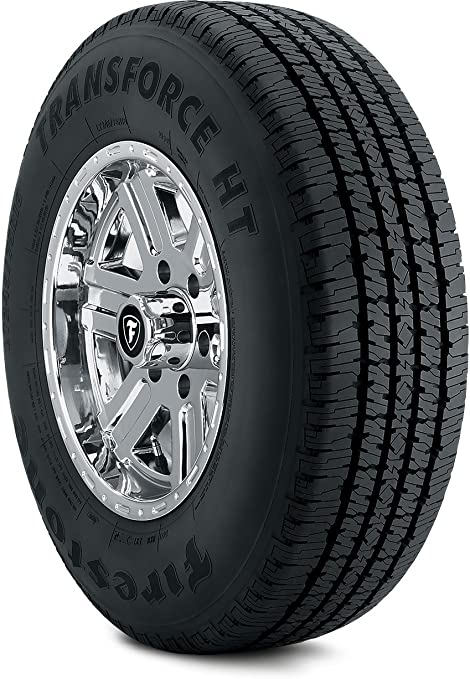 This review is designed to detail the best and the worst aspects of Firestone Transforce HT tires, giving you all the information you need to decide if these tires will measure up to your needs.

We have researched Firestone Transforce HT tires from all angles to provide you with the most comprehensive information. In this article, you will find the information provided by Firestone, comparisons to other all-season tires, and key points highlighted in reviews by real customers.

Based on our research, we can conclude that Firestone Transforce HT is overall not a good tire. It’s expensive, but performs poorly in almost all categories. However, several users have said this tire is a great option for towing, so if that’s all you do with your vehicle, this might still be the tire to choose.

Towing aside, instead of Transforce HT we recommend buying Firestone Destination LE3 if you want the best performance, and Goodyear Wrangler Fortitude HT if you want a more affordable option.

We did not come to this conclusion without a great deal of research. To find out why we made our decision, take a look at our data from multiple types of sources.

In this review, we will analyze traction in adverse weather conditions, pricing, the lifetime of the tire tread, and bonus features that customers have noted. We will also compare Firestone Transforce HT tires to similar all-season tires.

Keep reading for all of the details you will need to make an informed decision.

Most of us know from experience that no tire is perfect – that would be too easy. All-Season Tires, like Firestone Transforce HT tires, are built to balance usability across varying road conditions.

Firestone promises all-season tires that provide comfort, solid performance, and reliability. Their tires’ traction is designed for wet, dry, and mild winter conditions throughout the year, and the tires are meant to stand up to heavy workloads.

Customers have rated Transforce HT tires across multiple contexts. These rankings are based on a 10-point scale, broken into the following:

The performance of Firestone Transforce HT tires across road conditions, according to customer reviews, are described below.

On a 10-point scale, the performance of these tires in wet conditions averages 6.9 points, so Transforce HT tires are ‘good’ in wet conditions. The 2 factors considered here are wet traction (6.8) and hydroplaning resistance (7.0).

Although wet traction is rated slightly lower, both of these subcategories are still within the ‘good’ range. However, compared to many other tires, the performance is not very good in this category.

Hence, we can conclude that while dry traction of these tires is sufficient, it doesn’t seem to be the most stable option. This may indicate that the sidewall structure on the tire is somewhat soft, allowing the tire to flex just slightly too much, causing the tire to be not as stable as it could be.

Ice traction barely manages to remain in the ‘fair’ range, with a rating of only 4.8. Deep snow traction scores are only slightly higher at 5.0, but light snow traction jumps up to 5.8.

For all-season tires, like the Firestone Transforce HT, handling in off-road conditions is also crucial. The average off-road performance rating is 5.0, or ‘fair’.

These tires have received the second-highest score in the comfort section, averaging 7.7, or ‘good’. The ride quality earned a score of 7.4, while the noise level earned a score of 8.0. Just as Firestone promised, they provide a very comfortable ride, making them ideal for long road trips and highway driving.

Most tire manufacturers will provide a 30-day warranty, but Firestone actually offers triple on their tires. With Firestone tires, you are promised a 90-day warranty.

Based on the 50 recent customer reviews we’ve researched, the treadlife of these tires can vary immensely. While 12 customers claimed that their tires did not reach the 50,000-mile mark, as they were supposed to, another 11 claimed that theirs surpassed this mark.

Of the customers whose tires lasted more than 50,000 miles, most people reported that they had driven 70-80,000 at the point of the review (some were still driving on the same tires). The highest mileage reported we found was 97,000.

Firestone Transforce HT tires generally cost $224 for size 245/70-17. This is the second most expensive tire in a list of 16 highway all-season tires of the same size. Although these are one of the most expensive, they rank very low. Based on customer reviews, they are ranked 15/16.

Hence, the quality you get for the price is not good. Given that the price of Transforce HT is in the premium-category, it’s performance should be much much better in all categories.

Let’s take a look at customer reviews and compare Firestone Transforce HT tires to similar tires to decide if they measure up.

When we consider tire performance across wet, dry, and snowy conditions, Transforce HT tires receive an average performance score of 6.67, just barely earning a spot in the ‘good’ category. Users rated these tires at 5.4, or ‘fair’ in the ‘would you recommend’ section.

We have noted that Firestone Transforce HT tires are on the expensive end of similar tires. A couple of options with higher ratings but lower prices include:

One thing to keep in mind about these tires is the ability to tow. While this is not a category ranked against similar tires, several users noted that they are very good for towing. This feature is great for anyone who loves to go camping or boating, for example.

Transforce HT tires have also been reported to stand up to heavy loads within the vehicle, which makes them very useful on work trucks.

Firestone Transforce HT tires are good all-season tires. They perform the basic functions expected from such tires in that they perform well under the most reasonable conditions. They are ideal for comfortable highway driving, towing, and carrying heavy loads.

Having said that, several more cost-efficient options are preferred by customers. We would recommend Firestone Destination LE3 tires over Transforce HT tires. The former is significantly less expensive while still receiving an overall score more than 2.5 points higher than the latter.

There is no category in which Transforce HT tires outrank Destination LE3 tires. Destination tires are significantly better in off-road, winter, and treadwear performance.