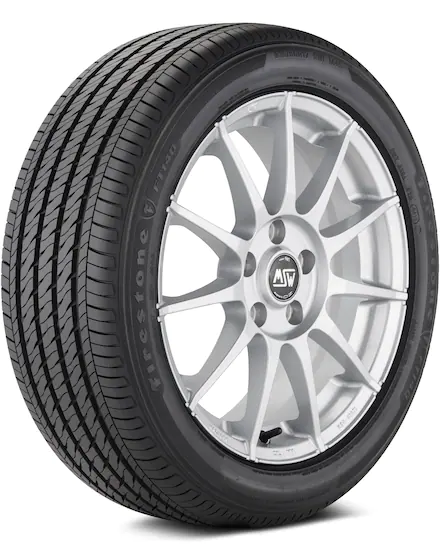 This is a review of the Firestone FT140 grand touring all-season tire.

We have researched the available information on the FT140, including performance testing results as well as user reviews, to bring you an accurate overview of the available data regarding this tire. This information will provide you with the ability to decide whether the Firestone FT140 is right for you and your car.

Based on our research, the FT140 is a reliable, durable, and all-around high-performance tire for general use in all seasons, including dry conditions, rain, and even light snow. Drivers looking for grippier traction in snowy conditions may want to look to a dedicated snow tire, but the Firestone FT140 will provide good performance year-round for those who don’t wish to change their tires with the seasons.

However, the FT140 may not stack up as well against some other similarly priced tires in its category. As discussed in this review, the FT140 received good - not great - reviews from drivers, with the major complaints focused on the tire’s performance in snow and rather loud road noise.

Read on to find out why the FT140 received high marks in dry and wet driving conditions but lower scores for snowy handling and comfort level.

The Firestone FT140 comes in a range of sizes aimed at passenger cars and sedans. It’s often found as original equipment on refined coupes and luxury sedans straight from the factory.

We’ll now provide a comprehensive insight into the specific aspects of the FT140, as revealed by user reviews and testing.

According to the manufacturer, the Firestone FT140 boasts four deep circumferential grooves intended to improve grip in all conditions. The tires additional features include diagonal etched siping as well as a ribbed tread design.

The FT140 scored well among users in dry conditions, earning an overall 8.0 out of 10 for dry performance. This score included 7.8 for cornering stability, 8.2 for dry traction, and 7.9 for steering response.

In all, the scores for dry performance showed that the FT140 is equal or better than many of its competitors for driving in normal, dry conditions.

Unfortunately, the FT140 scored lower than most of the other tires among user reviews for snow/winter performance. The FT140 received a 4.3 average rating out of 10 (“poor”) which landed it near the bottom of the group.

One positive, however, was the tire’s rating in light snow, where it scored an average of 5.4 out of 10 – respectable for a tire that is not specifically designed for snowy driving.

Nonetheless, the user reviews suggested that one should look elsewhere for a tire to be used in deep snow or ice.

On the comfort and noise, the FT140 received lower scores from users, with some drivers reporting that the FT140 got noisier as tread began to wear down after 10,000 miles or more.

Users concluded that the tire’s general comfort level was “fair” – an average of 6.3 out of 10 – with the noise level being the main complaint bringing down the comfort score.

On the other hand, the FT140 got high marks for durability, with users finding that the tire lasted longer on average than many other all-season tires in the same price range. Users gave the FT140 a 7.5 average score out of 10 for treadwear, showing that the tire will last longer than many competitors under normal driving conditions.

In fact, durability was the category where the FT140 compared most favorably to the competition, receiving higher scores than several pricier models.

Car and Driver also performed testing of the FT140 tire included as factory equipment with the Honda Civic. The test determined that the FT140 achieved a .83 g result on the skidpad test, indicating that the tire’s grip in lateral acceleration is less than the force of the Earth’s gravity.

Car and Driver concluded that this result was acceptable but not impressive for tires of its class.

Comparisons on tirerack.com between the FT140 and several other all-season tires showed that the Firestone was on the upper end in terms of price compared to comparable tires. Several cheaper tire options received better user reviews across the board.

Thus, the tire’s cost-to-performance ratio is subpar, although the differences in price are relatively small.

User reviews and testing show that the tires are perfectly good under normal driving conditions and rank and perform respectably when compared to their peers. Nonetheless, the FT140 got low marks for performance in snow, and the price point demonstrates that budget-conscious drivers may want to look elsewhere to maximize the bang for their buck.

The similarly priced Firestone WeatherGrip received higher scores across the board from tirerack.com users, so that model may be a better choice for many drivers.

Based on all of the information considered for this review, the Firestone FT140 is a recommended tire. Manufacturers trust the FT140 for use as original equipment on many modern sedans, and user reviews and testing show that the tire performs quite well in dry and wet conditions. Nonetheless, there are cheaper alternatives, and the FT140 suffers in snowy conditions. Drivers looking for a smooth, quiet ride may also want to consider some alternatives.