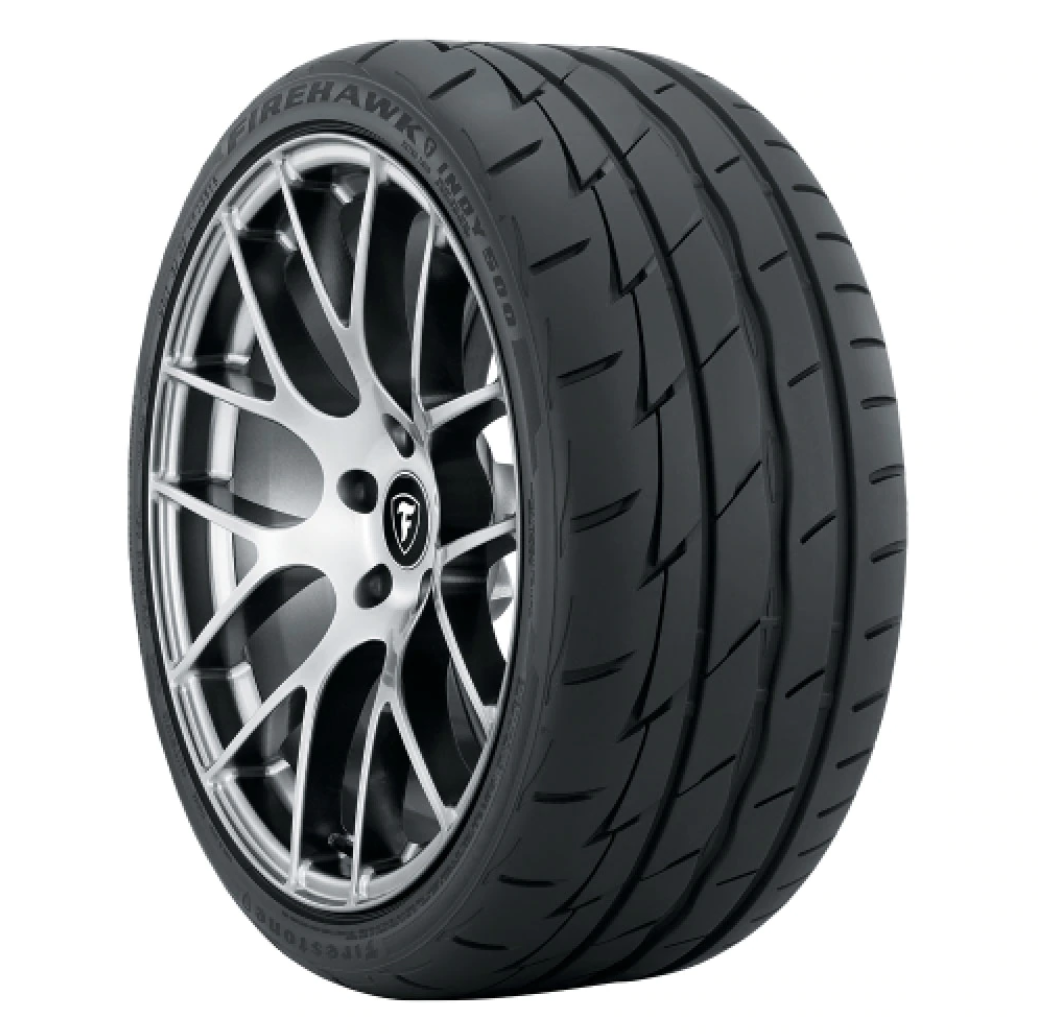 This is a review of Firehawk Indy 500 from Firestone.

It is meant to help you make better decisions in your next tire purchase. All information here is accurate and reliable; we did careful research to put them together. This review contains the manufacturer’s stats, owners’ thoughts, and experts’ opinions based on drive test.

Based on the research, we have concluded that the Firehawk Indy 500 is an excellent choice for diving in dry or warm terrains. The tire looks amazing, grips the road well, and delivers acceptable wet traction. It gives a quick and stable ride and a perfect tire for sports cars, sports Coupes, and fast Sedans.

However, great performance of this tire comes with the cost of shorter tread life.

In this Firehawk Indy 500 review, we will analyze the tire’s performance in dry, wet, and winter conditions. You will also find out its price and how durable it is.

Keep reading as we unveil more about the Firestone Firehawk Indy 500.

The Firehawk Indy 500 is an ultra-high-performance summer tire met to deliver incredible traction in dry conditions. It is one of the best summer tires from Firestone and

Firestone built the Firehawk Indy 500 for drivers of sports cars, sports coupes, and performance Sedans who like spirited driving and want to bring out the best in a high-performance car.  You will find them as OEM in vehicles like the 2012 Cadillac CTS-V Sedan. Interestingly, even with so much performance on the road, the tire is far cheaper than most tires in its class and competitors.

Many say they had an impressive road grip and traction on wet roads. A user said he drove around 75mph during a heavy downpour yet didn’t hydroplane. Thanks to the circumferential grooves made with pulse groove technology that helps channel water away from the tire to avoid hydroplaning and provide better wet traction.

However, other owners say the tires perform terribly on wet pavement. They stated the tires hydroplaned during normal highway speeds in the rain, which was quite understandable since it’s a summer tire. They drove at a relatively low speed. However, during the following summer, when the tread had significantly worn around 10k miles, driving in the rain or any wet conditions became dangerous and downright scary.

A user stated that even around 45mpg, whether the rain is heavy or not, the tires hydroplaned. Others said the tires would slide on every puddle it hits, no matter the speed level. Thus, making them feel less confident.

The tires give incredible traction and grip on dry pavement. Not surprising, this was the real reason it was built. Users were impressed with how the tire holds well even at high speeds. While it inspires confidence in most dry terrains, some users say they feel more confident driving on highways.

However, other users were not impressed with the dry grip. A user complained that his FWD now understeers, whereas he didn’t experience this in his previous tires. Others attribute the loss of dry traction to tires overheating; they said the tires have poor heat management.

Users didn’t say anything as regards snow performance. As such, Tirerack didn’t provide any information about snow ability. However, summer tires are known to perform poorly on snow. They are not meant to be driven in any cold temperature. So if you constantly commute in snow areas, this is not for you; you may get a winter tire instead.

But even with this, it still doesn’t match the wet braking distance of the Falken Azenis FK510 in wet and dry conditions.

A good number of reviewers stated that the tire has precise steering responsiveness. However, others were not on the same page.  They acknowledge it is a good tire, but they do not respond instantly to their inputs. Noting that the decrease in steering response makes their cars less fun to drive.

Some who experienced understeers in their previous tires when taking turns were happy with how these tires grip during turns on wet roads.  Many also cited a swift and impressive turn in the dry. Thanks to independent shoulder blocks built to improve dry cornering and handling.

However, not everyone had a seamless cornering. Some users said that cornering above 100mph was challenging for them. Others say the tires feel mushy when taking turns, stating that when cornering on an open sweeping bend, their vehicles do not respond to minor steering movement.

However, according to tirerack.com test, the tire doesn’t have the best cornering behavior, especially in wet conditions. Yes, cornering in the wet is decent but not as good as the Falken Azenis FK510.

The Firehawk Indy 500 were noted to be very quiet and ride smoothly. But according to reviews, everything about the tire changes as it ages. Users say the tires were very loud and vibrated, especially at high speeds.  For others, they become loud during braking or cornering.

But we observed these were users who had put in some miles up to 10k or above. In a nutshell, the tire become noisy as they wear. How noisy are they? Loud enough to make one feel embarrassed, lost sanity, and very difficult to make phone calls, a user said.

While the ride is no doubt smooth, users say you will likely feel every road bump or imperfection you come across, especially as the tire ages. However, the tirerack

comparison test noted that the General G-MAX RS has a better ride and noise quality than the Firehawk Indy 500.

The Firehawk Indy 500 does not come with a mileage warranty; this many found upsetting. Many users stated that the tire has a short tread life and wears terribly. To users, Firestone knew this, which was why they didn’t include a mileage warranty. Which is right to conclude that Firestone didn’t build this tire to last.

Some at less than 5k miles, the tires were already worn. Others managed to get 7-10k miles, while the highest some users recorded was within 15k-30k miles. The ones that managed to get 10k miles and above complained of tires wearing unevenly even after rebalancing. Some even experienced uneven wear and worn-out tires at just 2k miles–before their first rotation.

However, it is noteworthy that most summer tires were not built to last; they wear quicker. The reason is, they are made with soft compounds, which help enhance road grip.

The Firehawk Indy 500 tire has a starting price of $121, with the biggest size sold for $280. Yes, it is a cheap tire compared to other tires in its category. However, considering its durability and the current price, it is an expensive option, some users stated.

For others, they didn’t expect the tires to last; the tires performed excellent above their expectations and therefore worth the price tag.

Users say as the tire wears down, performance is reduced. The tires were also noted to be unpredictable during hard cornering or acceleration. Some complained that the tires not having rim protectors was part of why they wear faster.

The tire is a good tire for maximum performance in dry conditions. It has an exceptional road grip, precise handling and provides adequate wet traction. Impressive, it is inexpensive compared to other tires in its category.

According to Tirerack.com, users had mixed reactions regarding recommendations. Some were happy with the tire, especially its performance, and recommended it. Others were disappointed; they said it’s not worth getting a good performance tire that doesn’t last; as such, they couldn’t recommend the tire. Nonetheless, the tire got a recommendation score of 8.8 out of 10

However, according to tiretrack.com comparison test, there are better options. These included the Falken Azenis FK510, General G-MAX RS, and the BF-Goodrich g-Force Sport COMP-2.

The Firehawk Indy 500 is another excellent tire from Firestone, and we highly recommend it. If you want a tire that holds up well in any dry or warm pavement and you’re willing to trade longevity for performance, this is for you.

In the dry, they are incredible, ride smoothly, it’s quiet, and has a substantial grip. In the wet, they are scary as they slide no matter the speed you’re on, especially as they age.

While the Firehawk Indy 500 is the best in its category, it doesn’t excel all around. According to tiretrack.com comparison test, the Falken Azenis FK510 tops in wet cornering traction and balance. The General G-MAX RS, on the other hand, has a better wet braking behavior and steering responsiveness than the Firehawk Indy 500.

However, on dry roads, none of these tires match the capability of the Firehawk Indy 500. It has a far better braking behavior, cornering traction, steering responsiveness handling, and balance than Falken Azenis FK510, General G-MAX RS, and the BF-Goodrich g-Force Sport COMP-2.