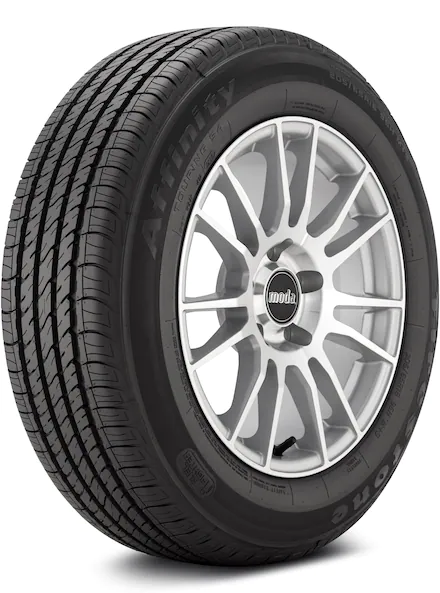 Our review sought to find if the Firestone Affinity Touring tire is worth your money.

We inspected tire reviews, specs, features, and ratings to determine if this tire can perform in all seasons, provide durability, and ensure a comfortable ride. Our review is free of any bias and solely based on data from users.

The reviews and ratings we found showed that the Firestone Affinity Touring review does not perform well in winter or wet conditions and that the tread life is poor compared to other brands. According to users, the noise level was high and the tires wore too quickly. With this inexpensive tire, you will pay for what you get.

In this review, you will learn what users had to say about the Affinity Touring tire’s performance, durability, and worth. You will also gain some recommendations that offer better quality and performance.

Firestone tires have a blend of positive and negative reviews. So, are their tires worth the price? Keep reading if you’re thinking about buying the Firestone Affinity Touring tire.

An Overview of the Firestone Affinity Touring Tire

The Firestone Affinity Touring tire is an all-season tire designed to give luxury vehicles a comfortable, quiet on-roading experience while providing efficient handling and good traction in all seasons.

Firestone’s touring tires are equipped with WeatherGrip to have more traction in all types of weather conditions. The Affinity Touring contains the enhanced WeatherGrip technology along with deep-cut grooves, a wide tread design, and wide steel belts for maximum handling and excellent traction.

This tire is the more affordable option compared to other touring tires inside and outside the Firestone brand. The tire produces long-lasting tread that wears evenly and slowly and gives drivers a quiet, comfortable ride.

Reviews and ratings determined that this tire only performs well in dry conditions and, even then, the tread wears tremendously fast. Winter and wet traction are also rated poorly.

The dry performance for the Firestone Affinity Touring tire is one of its best aspects. Dry traction has the highest rating compared to other performance measures.

Overall, dry traction received a 6.5 rating out of 10 from users. Those same users rated the tire’s cornering ability as a 6.0 and the steering response as a 6.3.

Dry traction was rated highly with 7.0 out of 10. According to ratings, users seemed to enjoy the dry performance of this touring tire.

Most users say that the tires fared well on pavement and highway roads with responsive steering and adequate handling. However, a few users were uncertain of the tire’s handling in different weather conditions.

The reviews and ratings for this tire’s wet performance are not as high as its dry performance. Most users mentioned that the tires were not resistant to hydroplaning in heavy rain and did not have much traction or grip.

The siping on the tires is designed to help the tire grip in wet conditions and evacuate water from the tire. According to many users, this is simply not the case.

The overall wet performance and dry traction ratings for the tire are 5.4. Many users say that the tires made them feel unsafe in heavy or light rain conditions, leading to a low rating of 5.3 for hydroplaning resistance.

One user reported his car losing control even in a light flurry of snow. Another user in the Pennsylvania area said the tire performance in any season other than dry ones was abysmal.

Low ratings and negative reviews about winter traction show that these tires perform even worse as the snow gets deeper and thicker.

The handling of these tires has mixed reviews with some reporting satisfaction and others reporting disappointment.

Both steering response and cornering have an average rating compared to other performance measures and other brands like Michelin or Hankook.

On the other hand, a few users commented on the efficiency of the tire’s ability to brake quickly. The time it takes to come to a stop in rain or snow is the only downside to the braking ability of the tire

Users report the tires being very loud and uncomfortable, especially as the tread wears. The rating for road noise from Discount Tire was a low 3.0. Users from Tire Rack rated the noise level as 5.5.

Aside from the noise level, the Affinity Touring tire provides an efficient amount of comfort for drivers. Touring tires are designed to give drivers comfort, quality, and low noise levels to ensure a comfortable drive.

However, this tire doesn’t give users a sense of quiet on the road despite it only being an all-season touring tire.

The Affinity Touring tire has a 5-year tread life warranty or coverage for up to 50,000 miles and a 90-day Buy and Try Guarantee from Firestone. If you feel unhappy with the tire, you can return it before the 90-day mark and get a full refund.

There are only a few reviews that speak positively of durability. The rest of the user reviews and ratings show how atrocious the tread life is, meaning that a tread-life warranty is a good thing to have with these tires.

Users reported cracks in the sidewall at less than 37,000 miles and splitting of the tires at 12,000 miles. According to one user, the tread was gone at 16,000 even when he rotated them as needed. Another user said his tires only lasted a year before he had to get rid of them.

This tire is priced on the lower end compared to other popular brands like Michelin, Cooper, or Goodyear. The average price for this tire ranges from $100 to $180 (possibly more) depending on where the tire is bought.

According to users, the price is efficient for anyone who does not drive in wet or snowy weather and does not care about tread life. Ratings show that the durability of these tires is not efficient or long-lasting.

So, with a lower-priced tire like this, you would be getting what you paid for.

The ratings and reviews we collected helped us determine that this tire should not be recommended to anyone. The overall performance of the Firestone Affinity Touring is poorly rated with the tire having no grip or traction in rain or snow. Users also say that the noise level is loud and the tread life is terrible.

The Affinity Touring is one of the cheaper tires on the market, but there are better options that have durability, comfort, and all-season traction, like the Michelin CrossClimate 2 and Continental ControlContract Tour.

As an all-season touring tire, the Affinity Touring doesn’t perform well. Its WeatherGrip is supposed to give the tire traction in all seasons, but reviews indicate that the tire only performs well in dry weather.

This tire is built for luxury vehicles to drive on main roads and seek out quiet and comfort. The Affinity Touring doesn’t always provide a quiet ride or durability, making it less than ideal.