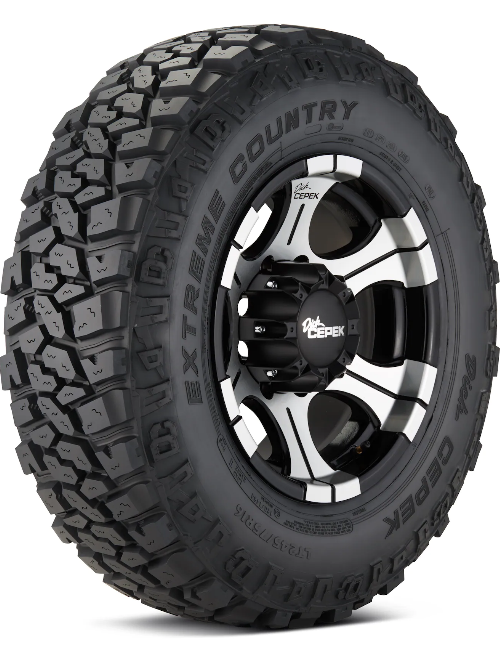 This is a review of the Dick Cepek Extreme Country All-Terrain Radial Tire.

Dick Cepek has prided themselves on being “the original adventure tire since 1958.” Their Extreme Country line of off-road tires is imbued with that spirit, giving customers a tire that does well in off-road conditions and on the easy streets.

After countless hours pouring over manufacturing stats, tests, and user reviews, we’re here to tell you everything you need to know about Dick Cepek’s Extreme Country offering.

Dick Cepek Extreme Country offers an affordable and quality tire experience for those who really love mudding in their off-road journey. Our research found users who were more than happy with their purchase regarding how the tire performed in wet or dry conditions and their handling on rocks and dirt.

Extreme County is rated for mud and snow (M+S), but users reported the tires worked much better in muddy conditions instead of snowy conditions. Questions concerning the tire’s tread durability did come up in our research, but many more users didn’t report the same type of issue.

The Extreme Country tire is engineered for light truck and sport-utility vehicles looking to go off-road on weekends and day trips – specifically with those seeking the best mud tire with performance and price in mind.

These tires come in nine different tire sizes across five wheel diameters in the 15, 16, 17, 18, and 20 ranges. The company claims the tires have improved chip and cut protection with wide outer voids and angled shoulder scallops that perform well in all conditions, including harsh snow terrain.

Depending on your tire size and what you’re seeking from the Dick Cepek Extreme Country, you’ll likely be spending anywhere from $200 to $400 on each tire.

Research and user reviews for the Dick Cepek Extreme Country line show that the tires usually perform well in most off-road situations, particularly involving dirt and mud. Sand and rock situations still receive high marks, according to our research, but these tires stand tall in mudding and dirt tracks.

When it comes to driving in wet conditions, our research indicates that the Dick Cepek Extreme Country tires are above-average performers.

Users have reported that the tires keep their traction when it comes to driving on wet roads and have higher resistance in hydroplaning situations.

Our research finds that users give a thumbs up to the tire’s dry traction, in particular. Cornering and steering, meanwhile, also receive love from users.

Snow performance is where our research indicates the Dick Cepek Extreme Country tires fall a little flat for many.

According to user reviews, these tires don’t perform the best in snowy conditions, even though Dick Cepek has marketed these tires as high performers in the winter.

Still, user reviews indicate this tire only has average performance in the snow. That’s something to keep in mind if you live in the Midwest.

Dick Cepek Extreme Country tires boast exceptional handling because of their tread compound. Our research found no known issues with users when it comes to the handling of these tires, so that comes as a plus in our book.

Many say that you should expect a certain amount of noise when it comes to off-road tires such as these, but research tells us that many users of this tire were not disappointed. Several user reviews said the noise wasn’t particularly an issue for them concerning the Dick Cepek Extreme Country tires.

One reviewer, however, indicated that the tire noise became more pronounced when their tires reached about 40 percent in tread usage.

We discovered in our research that users found these tires to be comfortable at first but would lose quality over time. No one wants to drive a truck around without comfort being at the forefront.

This factor is where the trouble comes in for the Dick Cepek Extreme Country tires. Our research has found that users of this tire have found durability issues. User reviews from several tire shop websites indicate users have run into tread troubles as early as 2,000 miles.

On top of that, at least one user said the soft rubber on parts of the tires came off in chunks during particularly heavy off-roading sessions with rocks.

Another user reported tread issues on the front tires on 4,000 miles even after a truck alignment and balancing.

However, our research also found users who were more than happy with the tire’s durability, saying they would hold up well even with daily abuse.

Remember, not everyone is taking these tires across the tough terrain of a desert or a muddy forest. There are those that just want an attractive tire on a well-maintained truck or SUV.

The price on the Dick Cepek Extreme Country tires is going to largely rely on what size you’re getting. If you’re getting these tires on the lower end of the size matrix, expect to pay just a shade over $200 a tire. Meanwhile, your bigger-sized tires are going to balloon in price to $400+.

On the competition end of things, Dick Cepek has a few worthy competitors for your hard-earned money:

The Cooper Evolution tires, in particular, are the highest-rated tires in this category among the three listed here, but be prepared to pay more of a premium.

Research indicates that the Dick Cepek Extreme Country tires are an affordable and safe bet when seeking a quality off-road tire for your truck or SUV, despite user reviews dinging the tires on their durability and tread issues. The tires get high marks from those who use them on Jeeps or smaller trucks.

In particular, these tires are beloved for their use in sticky mud. However, despite being rated for both mud and snow, those who used the tires in the snow were more disappointed in their performance.

But the most eye-opening issue based on our research came in the durability department. When a tire’s durability is called into question, you have to take notice. With many user reviews saying the Dick Cepek Extreme Country tire tread is an issue, it’ll be essential to keep that in mind if you’re eyeing these tires for your next off-road trek.

Still, on the whole, these tires received above-average marks on their looks and capability. You would be hard-pressed to not take a look at these considering the price, as well.