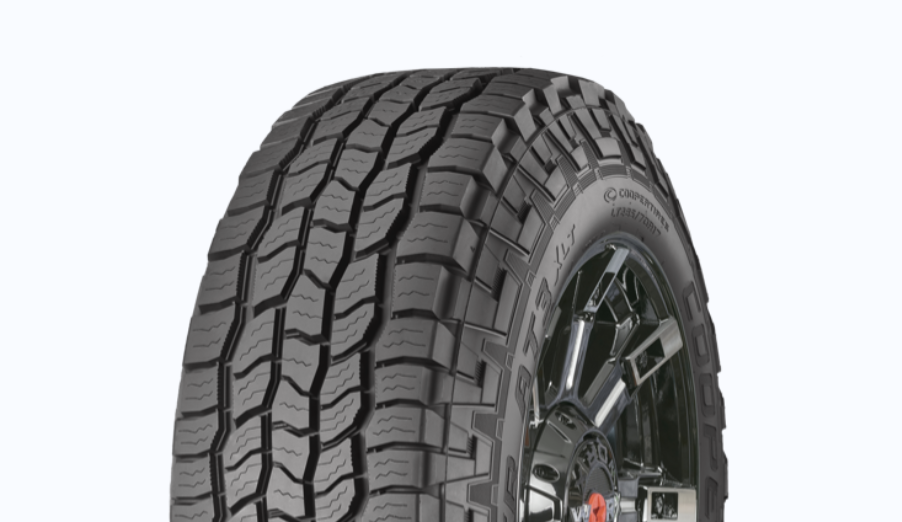 This article is a comprehensive Cooper Discoverer AT3 XLT review, designed to help you decide if these tires are right for you and your truck or SUV.

The Cooper Discoverer AT3 XLT provides an excellent balance of on-road comfort with ample off-road traction. While the Discoverer AT3 XLT doesn’t necessarily excel in snow compared to others in its class, its abilities to handle towing, hauling, and traction on dirt and mud readily compensate.

The Discoverer is rated for severe weather conditions, but there are other tires which handle heavy snow better. That said, we would still feel confident putting the AT3 XLT on our truck or SUV and driving in the winter.

Many of the user reviews point specifically at the Discoverer’s ability to handle a significant mix of pavement, gravel, and the unpaved while maintaining a quiet, smooth ride. With people looking to their pickups for daily driving duties, the Discover has the right balance of “I’m in my truck all day” comfort, good tread life, and confident handling.

The average truck or full-size SUV driver has the 4×4 package or all-wheel drive for a reason, and that’s to have confident handling in places where others don’t often go. Tires can make all the difference in where you go, and tires like the Cooper Discoverer AT3 XLT give your vehicle the best chance to go places that might otherwise provide a challenging drive.

We don’t rely on hearsay or even what the manufacturer says about their tires. In fact, we try to translate some of what they say to make it more understandable for normal drivers. Instead, we rely on user-written, detailed reviews and tests performed on the Cooper Discoverer AT3 XLT that provide concrete results. Why? Because when you need your tires to perform, you want the confidence to know that they will.

Cooper provides a blended experience of highway comfort, low noise, and well-balanced off-road performance for people who need to go hit the dirt, sand, or gravel once in a while. Trucks and SUVs are the primary vehicle types for the Discoverer AT3 XLT, and these tires are not meant for sedans or smaller.

Ready? Let’s look at what reviewers and real tests had to say about these great value tires.

Cooper rates these tires for All seasons, in a unique segment for On and Off-Road as well as winter weather handling. The Discoverer AT3 XLT has wide, rugged shoulders for extra traction off road, giving the tire as much footprint as possible when cornering on dirt or mud. Extra-large ledges and channels also help the Discoverer  AT3 XLT expel stones and gravel to keep them from affecting your traction or embedding themselves.

These tires are also manufactured with a slight arc to promote even tread wear, which is especially important when traversing pavement, gravel, and dirt all on the same day.

Overall, Cooper promotes the Discoverer AT3 XLT as an off-road and on-road tire with a comfortable, quiet ride. Cooper does so at a more reasonable price and offers a long 60,000-mile warranty while starting at around $250 per tire. Competitors are generally at a higher range. Let’s see if the price makes a difference!

Generally speaking, many reviews discussed having switched from stock competitor brands of tires to the Cooper Discoverer AT3 XLT. Most of them were impressed by how quiet the tires were compared to previous brands, especially considering how aggressive the Discoverer is treaded. One buyer reported pulling an Airstream trailer through mountain passes in snow through Idaho and Montana with no issues. Now that’s confidence!

Reviewers who really pushed the Discoverer AT3 XLT reported that the tire handles very well in wet and rainy conditions. Drivers went off-road on mud and said they had zero issues being able to drive at a comfortable speed and corner sharply. They were also impressed at the lack of noise from a tire style that typically makes more noise.

The Discoverer’s AT3 XLT’s slight curve and overall flexibility are the most likely reason why the tires are so quiet on so many surfaces.

People who really pushed the Discoverer AT3 XLT reported that it handled quite well on dry and that it might be one of the standout features. Trucks and SUVs cornered well and handled highway bumps and grooves admirably. Truck drivers also reported feeling quite comfortable at high speeds and open highways while feeling balanced going down off-ramps.

The one thing that winter drivers tend to want to avoid is the feeling of being out of control on an icy or snowy road. Discoverer AT3 XLT handles snow better than the average off-road tire and finds a good balance. Cooper manufactured these for a 3 peak snow rating, meaning they can handle severe snow.

Most reviews agree with this, including one who drove with confidence through a sleet and snowstorm. Combined with a good all-wheel drive or four-wheel drive system, these tires are not afraid of the weather. The wide, aggressive shoulders help move the vehicle forward while maintaining grip.

Cooper has promised shorter braking distances, including up to 20 feet shorter than average in the snow and 10 feet on wet pavement. There are no charts out there with actual test numbers, but detailed reviews indicate that Cooper fulfills this promise.

That said, multiple reviews indicated that the Cooper is beaten by its own cousin when stopping in wet conditions. This includes the Discoverer AT3 4S, which beat it by a couple of feet. This isn’t all that disappointing since the XLT is designed to be a more well-rounded tire that does better off-road than the AT3 4S, and makes for a good compromise in performance.

Reviewers generally said that the braking distances were shorter than expected under wet conditions. Snow conditions were similar, with its own cousin slightly beating with a shorter snow braking distance though they both did quite well with M+S ratings.

Regardless of the snow ratings, drive carefully when the white stuff is falling.

When a driver with a truck tells you the tires are comfortable on and off-road, you believe them. A trucker who frequently takes his rig on service roads noted the ride difference in his old tires when he would need to be on narrow, dirt roads and old highways on the same day.

Most drivers using the Discoverer AT3 XLT only wondered how long the handling and ride comfort would last.

One of the biggest elements of surprise mentioned for the AT3 XLT is its low noise and high comfort. This is saying something coming from people who experience rough roads on a daily basis.

Most raved about the lack of noise and ability to hear a phone call over Bluetooth while enjoying the smooth ride on the highway. Out of many reviews, few to none complained about additional road noise from previous experiences.

First, as mentioned the AT3 XLT offers a 60,000-mile treadwear warranty. One thing that many trucks and full-size SUV drivers tend to worry about is tread wear while towing or driving with a full load.

Reviewers pushed that worry aside and noted that the tread wear was as expected, and an obvious indicator is that people with 40,000+ miles on their tires were still happy with the overall performance years later. The tires were made for the purpose of providing long-lasting traction and durability.

Cooper’s AT3 XLT is not the highest-priced tire in the category, nor is it the lowest. With rebates and sales on tires from tire shops, price differences can readily fluctuate through the season.

That said, with a starting price of around $250 per tire, there are more expensive tires that do slightly better all-around when it comes to snow handling and comfort but few offer Cooper’s combination of ability and value.

There are many brands and tires serving the all-terrain and on and off-road category. Here are a few of the best:

The General Grabber and Pirelli Scorpion are especially highly rated but come at a higher cost than the value-priced Cooper. For all-out off-road performance, it’s hard to beat the BFGoodrich All-Terrain T/A KO2.

The Cooper Discoverer AT3 XLT provides an excellent balance of on-road comfort with ample off-road traction. While the Discoverer AT3 XLT doesn’t necessarily excel in snow compared to others in its class, its abilities to handle towing, hauling, and traction on dirt and mud readily compensate. While the Discoverer is rated for severe weather conditions, there are some that better handle heavy snow. That said, we would still feel confident putting the AT3 XLT on our truck or SUV and driving in the winter.

Many of the user reviews point specifically at the Discoverer’s ability to handle a significant mix of pavement, gravel, and the unpaved while maintaining a quiet, smooth ride. With people looking to their pickups for daily driving duties, the Discover has the right balance of “I’m in my truck all day” comfort, good tread life, and confident handling.