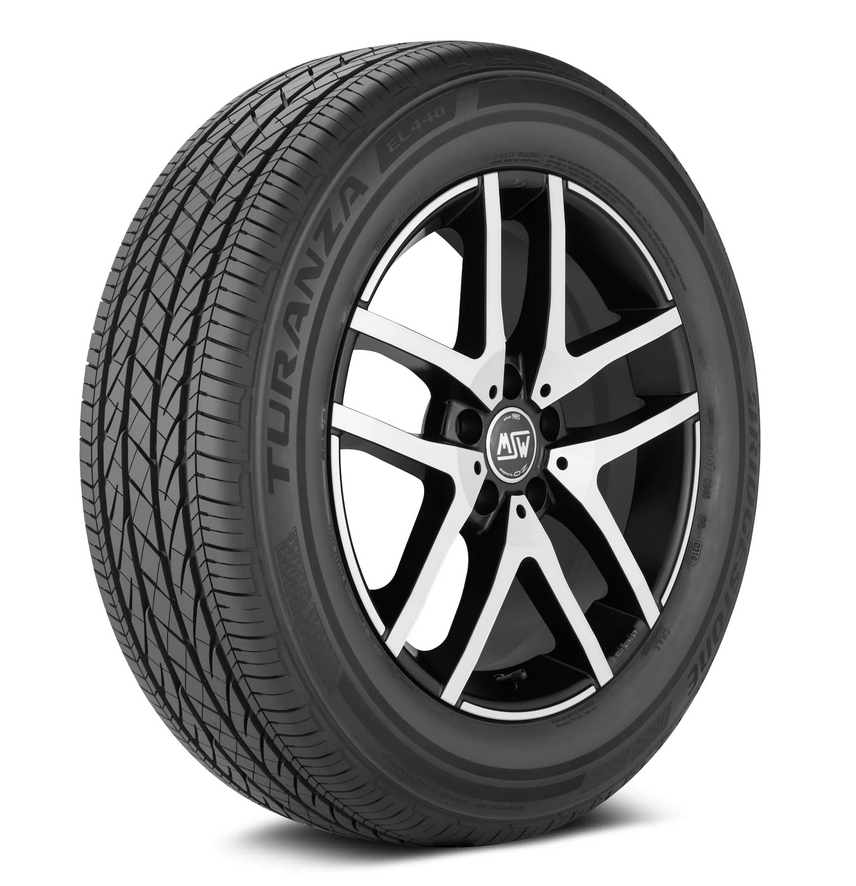 This is a review of Bridgestone Turanza El440

We have carefully researched the manufacturer’s data, users’ reviews, and experts’ opinions based on drive test. So be rest assured that whatever information you see is based on a combination of real user reviews and real tests.

The data and user experience we've gathered so far suggest that the Turanza El440 is an excellent tire for both cool and spirited driving. It was built to deliver wet, dry and light snow traction. It can be driven on highways and occasionally on off-road packs. Steering responsiveness is superb. However, performance is affected as tires age, and the tread life on this tire is far from optimal.

So in the Bridgestone Turanza El440 reviews, we will analyse the tire’s durability and grip. This includes grip on wet, dry, snow, and icy roads. What more? You will also find out the price of this tire and the sizes available should you come across it.

So keep reading to explore more about the Bridgestone Turanza El440.

Designed for grand touring all season, the Bridgestone Turanza El440 provides responsive handling and durability. And sits at number 50 among 57 tires in its category. The Turanza El440b is built for drivers of coupes, performance, and luxurious sedans. They hold on nicely to the road, and directional stability is excellent.

You will find them as factory tires in cars such as 2015 Toyota Avalon XLE, 2018 Honda Odyssey EX-L and Elite, 2018 Toyota Camry XSE and Hybrid XLE, 2021 Lexus ES 300h, etc. The tire is a suitable replacement for worn-out tires and is available in sizes 16, 18, and 19. Not a cheap tire but an affordable option for drivers who prides in performance.

Wet traction on these tires is unpredictable. Some users said they got an impressive wet road grip and traction and also did not hydroplane, especially when backed up by an AWD. You will have an impressive spin to start these tires on a wet road when combined with a vehicle with high horsepower, a user said. And feel very secured whether on low or high speeds

However, another set of reviewers noted that sometimes they get traction, and other times, traction disappears. The next group of reviewers said they were utterly disappointed with the tire’s wet traction. They noted that little water on the road causes them to slide. And when there is a heavy downpour, the tires hydroplane like crazy.

One user notes that at 55mph, he can feel the car sliding, thus, feeling so insecure with these tires. Another said she was finding it difficult to maintain traction without the traction control activating during a heavy downpour at 45mph. Another who hit a puddle at 45mph also hydroplaned into an oncoming traffic lane.

According to the user reviews, the Turanza El440 does hold on very well to the rode. To some, it gave Okay wet traction to others, and dry traction is excellent. And creates drivers confidence even when driving spiritedly.

However, other users said the tires do lose grip and cause their traction control light to come on. This complain were mostly from people who had put around 15k to 20k miles on their tires.

Snow and ice performance on these tires received a relatively low score. A majority of users noted that deep snow and ice traction is horrible. They pointed out that no matter how hard they tried, they found it difficult to go from a stopping point without spinning. And sometimes lose control. Hence, making the tire very dangerous to use during winter

Other reviewers noted that while the tires are not great in the snow, they are not awful either. So they can say the tires provide adequate traction in snow.

It is important to note that most all-season tires, no matter how good they are, can never give you traction like a proper winter tire. So if you constantly drive in winter regions, a dedicated snow or winter tire may be what you need

According to reviews, dry braking distance is great, though not outstanding. Wet is okay. However, it is highly terrible on deep snow or ice.  On snow, when trying to stop at a traffic light, it’s usually difficult and most times causes them to slide

If users love one thing about the Bridgestone Turanza El440, that will be its steering responsiveness. The tires were noticeably very responsive on both dry and wet roads, giving confidence to drivers. But the ride was very stiff.

According to users reviews, wet cornering is adequate, but not excellent. However, dry cornering is pretty good; it seems better than wet. Deep snow and ice cornering were very poor. On light snow, users say they get not-so-excellent cornering traction.

If you’re using an AWD, you may be able to corner adequately on light snow. But it becomes worse if you’re on a 2WD and significantly worse if the tires are ageing.

Many users at the beginning of tire’s life were impressed by how quiet these tires are both on highways and off-road packs, although not ultra-quiet. But the tires got progressively noisier as they age, especially around 10k to 15k miles.

Several users complained of the tires being noisy on highways. On concrete surfaces, they sing with an increase in pitch as speed increases. On Asphalt roads, they rumble and roar, bad enough to drive one insane.  And would sound like the tire is about to come off. After spending money to check and balance it, the noise still won’t go away

According to users, the Turanza El440 has minimal resistance to bumps. That is, they get flat tires due to punctures from bumpy roads or potholes (whether deep or shallow). Although some stated the tires are sidewall resistant, they entered a couple of dishes which surprisingly did not blow up their sidewalls.

However, the impact was felt; that is, they could feel the slightest road bumps or imperfections and in a very harsh way. Thus, making their journey extremely uncomfortable combined with the road noise.

The Turanza El440 does not have a mileage warranty. So users do not even know how many miles to expect from the tires. This they found very annoying. Very few users got between 40k to 61k miles, of which most were easy-going drivers. For others, it was a different story.

Users said that, even with constant air filling, alignments, and rotation every 5k miles at dealership, the tires still didn’t last. Some stated that at 12,000 miles, the tires were worn and extremely dangerous to ride on, especially in places with constant snow. Others got around 13k, 15k, 20k, and very few got only 35k miles from a tire of such an amount.

For others whose tires were deflated from road defects. They complained that they get worn close to the rim protector, making it impossible to repair.  These were people who had put on just 7,000 miles.

The Bridgestone Turanza El440 starts at $145, with the biggest size sold for $281, considered affordable but not cheap. However, considering its durability, the tire is pricey and not worth the cost. Even users that gave a positive review felt they would get a better option for less or the same amount.

The tires are good on dry roads but terrible for winter driving. If you are okay with the tire’s short tread life, you have a good tire. But the tire’s cost compared to the mileage and performance is not worth it.

This is inclusive of its unpredictable wet and snow performance. Additionally,the tires did not perform well throughout their short life. At 10k miles, performance has started dropping drastically.

Confirming this, users say they will get a far better option for less or the same money. The tire’s performance is unpredictable; tread life is short and even if it handles well; it’s still junks, buyers reiterated. The tire, in the end, gained a recommendation score of 1.9 out of 10.

The irony is this, even some users that gave a positive review still wouldn’t like to repurchase or even recommend. They say the tire is not worth the price. There are better tires with excellent wet, dry, and snow traction with longer tread life.

The Bridgestone Turanza El440 is a good tire. However, we will recommend it only for dry driving and responsive handling. On a wet surface, it works when the tire warms up. But when it is cold, you will noticeably see a drop in traction. Thus making it very unpredictable in wet or cold conditions.

For better dry driving and predictable wet or cold driving, you may consider the Crossclimate 2, Vredestein Quatrac Pro, Firestone weather grip, or even the Bridgestone Turanza QuietTrack. All tires are far better but very pricey.

While the Bridgestone Turanza El440 is far cheaper compared to the others, it is far below them in many ways. The Turanza El440 has a short tread life, terrible winter performance. And as tire ages, the road noise becomes terrible with a drastic decrease in wet, dry, or even light snow traction.