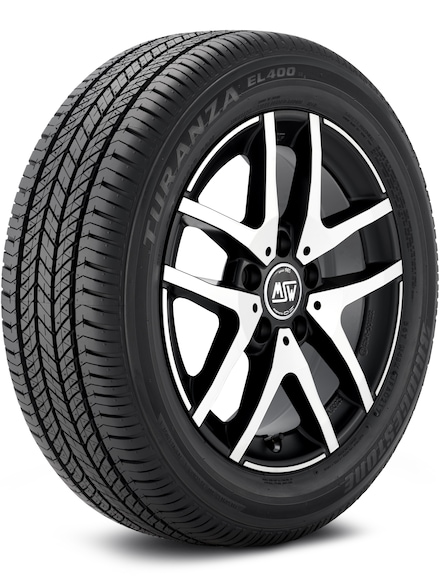 This article is a comprehensive review of the Bridgestone Turanza EL400-02, which should help you determine whether it’s the right tire for you.

We’ve done our due diligence in researching Bridgestone’s technical manufacturer specifications to reach our conclusion. We also looked at how Bridgestone’s Turanza EL400 02 has performed in various tests of roadway situations. Then, we compared this data set against customer reviews to describe this tire’s performance comprehensively.

Bridgestone Turanza EL400-02 all-season tire is overall a very poor tire. Based on our research, we can’t recommend this tire to anyone. Almost all user reviews we have found indicate that Turanza EL400-02 doesn’t provide sufficient traction, can be even dangerous in wet conditions and has a very poor tread-life. In addition, it doesn’t have a treadwear warranty.

Find out more about why we recommend the Bridgestone Turanza EL400-02 below.

The tire is a mid-range budget tire that’s is designed for daily commutes. While not the least expensive in its category, it is not the most expensive and ranges approximately $100 and up.

This tire’s performance in wet and snowy conditions is far from optimal, according to tests and reviews.

The Turanza EL400-02 performs at an okay-level in dry conditions, scoring around average in user reviews in cornering stability, dry traction, and steering response. In tests by Tirerack.com, the steering is responsive on most road surfaces and is adequate for everyday driving and commuting.

With that said, it’s far from the performance that best similar tires have to offer. Dry conditions are practically the only conditions these tires should be used in.

According to user reviews, the Bridgestone Turanza EL400-02 struggles in wet conditions despite product information touting quality construction and solid grip on dry and wet roads. As an all-season tire, though, the tire scored at around average in hydroplaning resistance and wet traction in user reviews.

Still, at an average-level, the tire is far from where it could be. For example, Continental TrueContact Tour is praised by the users about its ability to handle wet conditions.

In tests against the Bridgestone Blizzak (Studless Ice & Snow) and the Michelin X-Ice by Tirerack, this all-season tire only delivered tolerable traction in snow and ice. In light snow conditions, the 2007 Toyota Camry used in the test had a hard time accelerating and, to avoid wheelspin, testers had to apply light pressure to the throttle.

Compared to the winter-specialized Bridgestone Blizzak, the Turanza EL400-02 had noticeably less traction in snow. In addition, users say the tire is very bad in winter conditions when compared to other all-season tires as well. Hence, we can’t recommend this tire for winter conditions either.

According to the manufacturer, the tires are equipped with Bridgestone’s O-Bead, a rounder bead structure that minimizes overlapped joints in the bead area for an improved ride.

User reviews describe the handling as smooth and adequate, compared to the manufacturer’s glowing marketing. Despite the uninspiring ride, user reviews on Tirerack.com rate the feel and handling as only slightly above average.

Despite being marketed for producing “noise-canceling sound waves to make your drive quieter,” user reviews on Tirerack.com only rank noise with an average to low rating, with one user rating claiming noise levels were high at 20,000 miles. Most users, though, agree that the tires provide a quiet, comfortable ride in dry conditions.

Overall comfort rates average to below average, with especially low ratings in comfort when driving in wet and snow conditions.

As of January 2021, the Bridgestone Turanza EL400-02 comes with a 90 day buy and try guarantee with a Manufacturer’s Special warranty. There is also a 5-year workmanship and materials warranty, with free replacement within the first three years.

However, there is no tread life warranty for the Bridgestone Turanza EL400-02.

Several users mentioned that this was the standard tire when they purchased their vehicle, and a few users mentioned needing replacement before reaching 40,000 miles despite regular rotations.

The price for the Turanza EL400-02 ranges just above $100, depending on the size. The 15” inch tire ranges up from $76 per tire. On the higher end, the 19” tire ranges around $280. Due to the tire’s lackluster performance as an “all-season” tire, the price is on par with other all-season competitors like Michelin and Goodyear.

Therefore, it looks like the tire even a sufficient budget option – instead, it’s priced like many other tires in it’s category, but doesn’t provide as good performance as other tires.

Based on user data and test results from Tirerack, in terms of absolute performance, the Bridgestone Turanza EL400-02 is not a good tire. Many users have reported the tire has been the OEM tire in their vehicle, and they have replaced the tire with another brand due to it’s poor performance.

The tire can be a stable choice as a default tire, if you will be driving in primarily dry conditions for an everyday commute.

However, there are much better options. Especially if you live in an area prone to snow and rain, tests from Tirerack.com show a clear preference for the Bridgestone Blizzak WS60 Studless Winter / Snow, even compared against the Michelin X-Ice.

In summary, we wouldn’t recommend this tire to anyone. While these tires would be fine for a driver who does not commute long distances, keeps their overall mileage down, and drives in mostly dry conditions, there are better options available in the same price range.

This conclusion is also backed by user reviews; practically none of the users say they would buy this tire again. We believe this is the most important indicator of the overall user satisfaction, and hence, we can say with confidence that this is not a tire you should buy to your vehicle next.

We recommend you choose a better quality tire; for example, for Continental TrueContact Tour 84% of the users say they would buy that tire again, and for Goodyear Assurance Maxlife the number is 86%. For Turanza EL400-02 the number is only 18%.

Why Gamble With Winter Tire Selection When Four of a Kind Always Beats Two Pair? |Tirerack.com