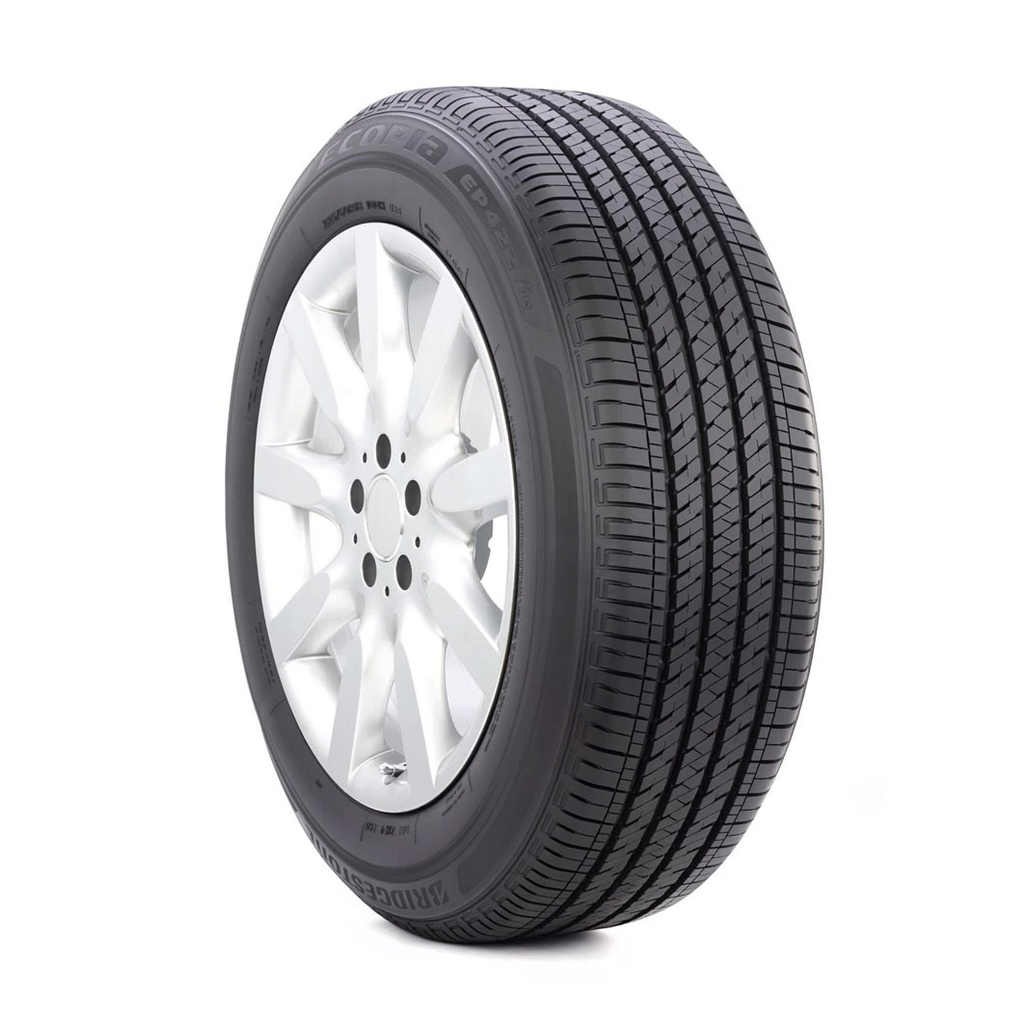 This is a review of Bridgestone Ecopia Ep422 Plus.

It encompasses accurate information from real-time users together with the manufacturer’s information and expert’s opinion based on test drives. We have researched reviews, opinions based on tests and data and have packed all into this Bridgestone Ecopia EP422 review to tell what to expect of this tire.

Based on our research we can conclude that the Bridgestone Ecopia Ep422 is a satisfactory tire for drivers who want to tour all season.

However, the traction on this tire is not very good on other than dry roads. In addition, a lot of users say the treadwear is not good, the tire is noisy and the noise gets even worse as the tire wears down.

In summary, we recommend this tire only for dry conditions.

So in this Bridgestone Ecopia Ep422 Plus review, we will analyze the tire’s performance all season. This includes traction and grip when accelerating, braking, or cornering on dry and wet roads. We will also talk about how it behaves on ice and snow and its lifespan.

Keep reading to see more of the Bridgestone Ecopia Ep422 plus.

The  Ecopia Ep422 Plus is an affordable option that one can get without breaking the bank. But we will see what users have to say about the price and tire’s worthiness at the end of this review.

Few users noted that the tires perform averagely in wet conditions. Thanks to its four circumferential grooves that help evacuate water from tires to resist hydroplane and enhance wet traction. Going further with users’ reviews, most noted that wet traction is acceptable but not outstanding. While they are okay in the wet, they do not inspire confidence, so there are better choices. However, many users stated otherwise.

According to users’ reviews, the tires have poor wet traction and would hydroplane even when accelerating gently. Hence, forcing the traction control light to come on. Sometimes, it will give a slight resistance to hydroplaning, and before you know it, you lose it.

They noted that tires spin when taking off from a stopping point. During heavy rain, they are too dangerous that it takes their confidence away totally. And if they have not lost control, it’s because they have had to adjust their driving styles to this tire– most found this very disappointing

However, others users noted that wet traction is possible if only drivers understand they need to slow down on wet roads. For others, heavy vehicles not matching the tire’s weight can cause a loss of traction.

Most users were happier with the tire’s performance in the dry than in any other climate. Thanks to the symmetric compound that enhances dry road traction.  According to users’ reviews, dry traction is excellent, though, for some, it’s just adequate and not outstanding.

Most users note that, even when accelerating over the slightest road imperfection, the traction control will be forced to come on. Many users say that while the tire performs well on dry roads, there are better options.

Few users noted the tires perform well even in 10-inch snows, and ice traction was like every other non-specialty tire. This, however, wasn’t the case for other users.

Most noted that the tires performed poorly in winter conditions and would make you lose confidence on the wheel.

The tires hardly give traction on ice or deep snow and will make you slide even in an AWD. However, they have adequate traction in very light snow. Thanks to the tire’s sipes that create biting edges in snow.

The tire’s braking distance is acceptable. However, users complained of losing traction when braking in the wet. Braking in the dry seems better than in wet conditions. But the tires however still lose traction causing the ABS to activate.

Braking in the snow, too, is not too favorable as tires quickly lose traction. In fact, it is dangerous to make a sudden stop using these tires as you may lose control. In other words, one would have to plan ahead before braking

The tires respond to even the tiniest road imperfection or bumps. Like one would literally feel it when passing through bumps. Most users noted that the steering is not very responsive and sometimes unpredictable.

Users also noted that they get poor traction when cornering on wet roads, even at low speeds. Thus, feeling very scared to corner with these tires. During dry cornering, traction is not excellent but progressive and predictable. On ice and snow, cornering traction is also inadequate, though manageable on light snow

Some users said the tires were quiet and rode comfortably, especially when new–they are not outstanding, but okay. However, they tend to lose these qualities as they wear down.

Few users stated they had to drive more than 1,000 miles before getting a quiet and smooth ride. Others noted that uneven tire wear causes more road noise during highway speeds.

The Bridgestone Ecopia Ep422 Plus comes with a 70k mileage warranty. However, buyers get half mileage for rear tires if they differ from the sizes of the front tires.  Some reviewers were pleased with the tread’s durability as they got between 70k to 93k miles from the tires with regular rotation. However, this was not the case for most users.

Users stated that the tires have prorated mileage but never lived up to the expected mileage. Users said that if only the tires could get them 60k out of the 70k promised, it would have been better. Many complained they couldn’t get up to 40k miles from the tire.

Although they wear decently initially, they started getting damaged by road debris, especially at the tire’s edges. And would wear unevenly; the highest some users obtained from the tires was just 20,000 miles

Others noted that at 20k miles, they already have an inner sidewalk bash and doubt if the tires will even get to 40k miles in such conditions. And even with rotation every 5,000 miles and alignments at 10,000 miles, the tires still didn’t fail to wear out.

The Ecopia Ep422 Plus starts at $130 and goes all the way up to $217 for the largest size, which is quite fair for a tire with such high mileage. However, many users said they didn’t get the expected mileage from the tires; as such, the tires are not worth the price. Only a few users appreciated the tire for the price; however, they suggested better mileage tires.

Outstanding characteristics of the Ecopia EP422 Plus

One major thing drivers loved about the  Bridgestone Ecopia Ep422 Plus is how much it increased their gas mileage. Thanks to its low rolling resistance enabled by Bridgestone Nano’s technology and fuel saver compound. For others, the tires can run flat for a while. That is, if the tire loses air due to a puncture, it can allow you to drive for some miles or before getting to a mechanic.

The Bridgestone Ecopia Ep422 Plus is an okay tire for dry conditions. It’s a good option for dry roads and helps improve fuel efficiency.

However, it is absolutely unpredictable during wet or winter conditions. The price seemed fair for these tires compared to the mileage warranty; some users got theirs.

According to other users’ reviews, the tires don’t perform well in wet or wintery conditions. It also has a short tread life and is therefore not worth the price.

Many users were not pleased with the tire’s overall performance and opted not to repurchase it. The tires have earned a recommendation score of 4.6 out of 10 from buyers – meaning, most of the users were not that satisfied.

The tires are good, but not in all conditions. The tires are great in the dry, but any other tire in its class can do that, so it’s nothing special. However, for improved gas mileage, these tires are highly recommended.

Performance in any other condition is unpredictable as they can sometimes give traction and lose it the next minute. Even if it provides satisfactory performance in wet and winter conditions, they are not really the best all-season tires out there.

There are better tires for less money that will give good dry and wet traction when accelerating, braking, or cornering, including longer tread life. The Vredestein Quatrac, Yokohama AVID Ascend GT, and General AltiMAX RT 43 are better options. While the Ecopia Ep422 Plus Starts at $130, the Yokohama begins at $97, Vredestein starts at $102, and the General AltiMAX at $101.