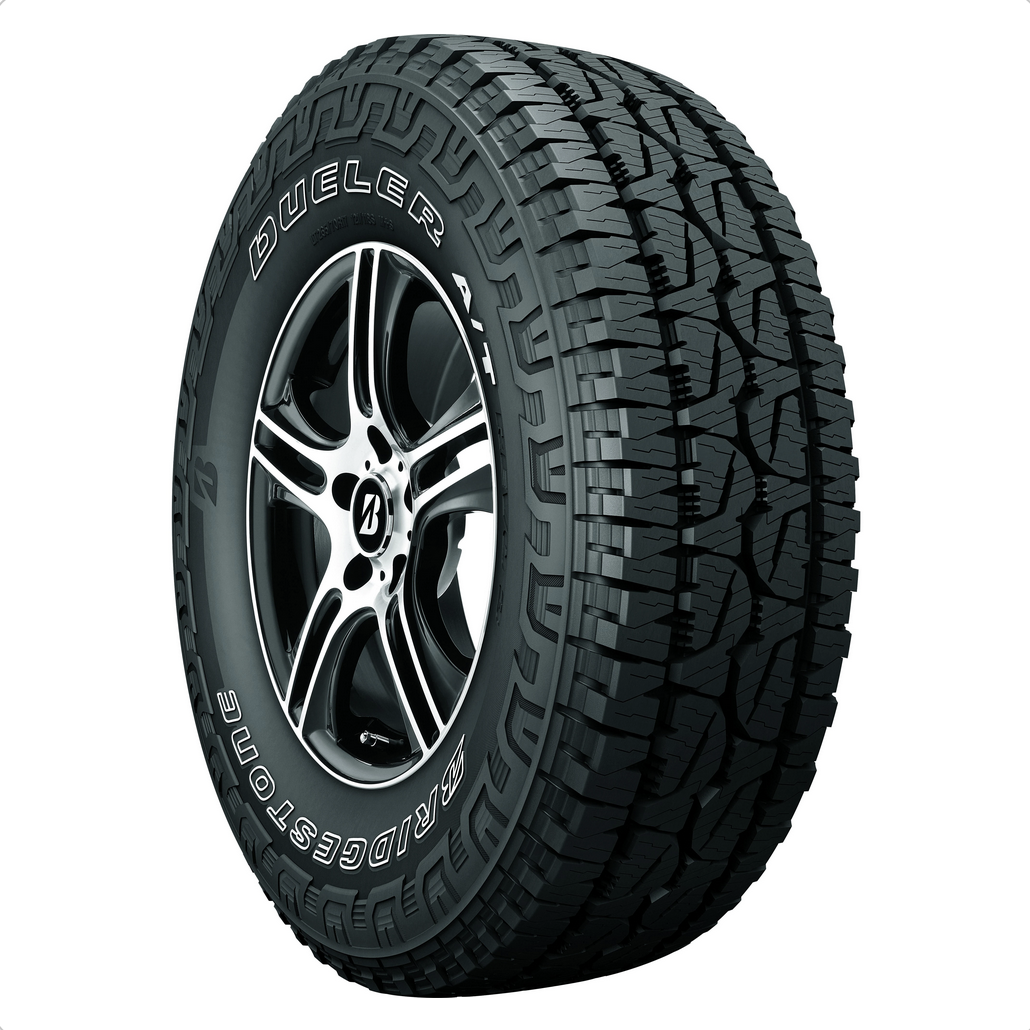 This is a review of the Bridgestone Dueler A/T Revo 3.

It encompasses the manufacturer’s stat, real users reviews, and experts’ opinions based on drive tests. After careful research using this information, we deem it necessary to tell prospective buyers what to expect from the tire if they come across it when shopping for tires.

Bridgestone Dueler A/T Revo 3 is an excellent choice for those looking for performance both on-road and off-road. The all-terrain tire is a perfect fit for SUVs, pickup trucks, jeeps, and crossovers.

It is incredible in the wet, dry, and even winter conditions. The ride is smooth and comfortable with unnoticeable road noise. Plus, you don't have to compromise performance for the tread's durability. If appearance is a factor, the tire looks excellent, though not aggressive

In this review, we will analyze the Bridgestone Dueler Revo 3  performance on different road surfaces. You’ll also learn about how it performs in various weather conditions–dry, wet, and winter. This review will also reveal how its performance relates to the tire’s durability. Of course, it will also help determine the price and if the tire is worth it.

Keep reading to find out more about the Bridgestone Dueler A/T Revo 3!

The affordable yet performance tire sits at number 9 among 28 tires in its class in comparisons because of its all-terrain performance and tread wear. Making it worth considering. The beautiful Bridgestone Dueler A/T Revo 3 is designed for pickup trucks, Jeeps, SUVs, and crossovers with durability guaranteed.

According to users’ reviews, the Bridgestone Dueler A/T Revo 3 is very effective in wet conditions. Thanks to the 3D staggered shoulder lugs that help provide traction in any soft terrain.

Road grip and traction are excellent on slippery roads or during the rains, thanks to the in-block sipes that create biting edges necessary for grip on slippery surfaces.

Users also note that the Bridgestone Dueler A/T Revo 3 effortlessly cuts through standing water even at high speeds. Thus, making you feel incredibly secure in the wet/rain.  This is possible because of the deep initial treads, wide circumferential grooves, and open shoulder slots that help direct water from the contact patch, hence resisting hydroplanes.

However, some users seemed to have complained about the tire’s behavior on wet roads after recording some miles. Two users said that the tires were perfect for the first 15k miles but started hydroplaning at 20k miles.

Many users also noted that Bridgestone Dueler A/T Revo 3 could hold up well through muds without issues – and even drive through the beach effortlessly, but only after lowering air pressure.

Yes, the Bridgestone Dueler A/T Revo 3 provides good traction in wet conditions. However, among the tires tested, the Continental TerrainContact had better wet traction during acceleration.

According to users’ reviews, the Bridgestone Dueler A/T Revo 3 performs awesomely in dry conditions. On dry pavements, grip is excellent. On dirt roads, these tires give fantastic traction. Thanks to the Bridgestone traction technology that helps tires pass through dirt roads effortlessly.

They can go through easy rocks with so much grip without squealing. They grip so well that on gravel roads, it feels like one is riding through a smooth pavement. These tires on sand give fantastic traction too. However, Tirerack test results noted that the Continental TerrainContact stood out in all dry conditions among tires tested

But again, going by other reviews.  A user complained she was losing traction, especially from the rear tires on dirt roads, that he had to put his car into a 4WD to maintain speed.

According to the test done by Tirerack.com, the Bridgestone Dueler Revo 3 seems to have better grip and traction in winter conditions than other similar tires in its class like the Continental TerrainContact A/T, Pirelli Scorpion All-terrain plus, and the Cooper AT3 4S. Which makes a better All-terrain option for users who want smooth snow and ice traction.

Most users also noted that the tire is decent in light snow, plows through deep snow with confidence, and on ice, they don’t slide. Few reviewers even stated that they had driven past 6-19 inches of snow, yet the tires had good grip and traction even on their 2WD.

This is possible because of the in-block sipes that create biting edges necessary for grip on deep snow. Also aiding is the Bridgestone traction claw technology that helps go through deep snow. Thus putting the Bridgestone Dueler A/T Revo 3 on top of the list among tires tested.  However, most stated that to ensure good traction during winter, they switched to their AWD/4WD.

To few users, the tires are terrible in any type of snow. They don’t grip in snow, neither do they hold well in ice. But this could be using an undersized tire. Moreover, it is not a winter tire.

Remember, while this tire is capable of adjusting to winter conditions, they are never designed for it. This might have an effect of the tread life. So if you constantly commute in snow and ice, it is wise to get a dedicated winter tire.

According to the test done by Tirerack.com, the Bridgestone Dueler Revo 3 has a shorter braking distance than other similar tires in the test. This means that on emergency braking, the Revo 3 is most likely to respond than the other tires. However, the Cooper Discoverer AT3 4S better stopping distance on ice.

According to most users, the tire balances and holds on to the ground even while carrying heavy items. However, at highway speeds, few users noted the tires were rumbling. The tires rode roughly through roads with imperfections and had a 20% reduction in mileage.

When the Dueler Revo 3 hits bumps or potholes, the tires absorb the impact very well, reducing the bang. This also keeps the vehicle balanced, thanks to the two-ply polyester casing under the steel belt that supports and stabilizes the tread. However, the Continental TerrainContact A/T, according to Tirerack’s test, seemed to have better balance.

Tirerack’s test noted that while the Bridgestone Dueler A/T Revo 3 is known to have responsive steering, the Continental TerrainContact A/T responds faster. One powerful area of this tire over its predecessor is that, unlike the Revo 2, the Revo 3 does not grab and throw stones when driving.

Most users noted the tires corners effortlessly in the wet, making you feel safe. However, a user said that the tires were perfect until 20k miles, where taking corners or accelerating in the wet became terrible. Nonetheless, Tirerack.com test shows that the Continental TerrainContact A/T has better wet cornering force and traction than the Dueler Revo 3.

The drive test shows that on dry roads, the Bridgestone Dueler A/T Revo 3 has an excellent cornering force and traction. But yet again, the Continental TerrainContact A/T seems to be on top of the game here. On off-road, users stated that the Dueler Revo 3 corners excellently going to and fro mountains and even dirt or stone roads.

Cornering in light and deep snow is also the major strength of the Revo 3 compared to other tires in its category tested by Tirerack. Confirming this, many reviewers were so pleased with the cornering force and traction of Bridgestone Dueler A/T Revo 3 during snow and ice. But yet again, cornering in deep snow, according to some users, was an issue.

Users noted that the bridge stone fueled Revo 3 is a quiet tire. Noise is almost not evident. They are silent on wet and dry highways and city commute. Even on off-road packs, the noise level is minimal.

According to the Bridgestone Dueler A/T Revo 3 review, overall, the ride quality is excellent both on wet and dry pavement. The ride is soft and smooth both on highways and off-road; though the tire feels firm, it is very comfortable. Even on bumpy roads, the tires remain stable.

The Bridgestone Dueler A/T Revo 3 comes with a 60k mileage warranty. A proof of bridge stone confidence in these tires. However, users get a half mileage warranty for the rear tires if they are different from the sizes on the front tires.

Many users were very pleased with the tire’s durability. They had put up a couple of miles yet still had plenty of tread life remaining. Infact, while the tire promised 60k miles, few users had recorded 62k already.

However, most users suggested that the tires will last longer and avoid uneven treadwear if rotated at least after 5k miles. Or better still, rotate them when you notice odd wears. Thanks to the tear-resistant shaped into a symmetric pattern that allows straight rotation to avoid uneven wear.

However, few reviewers noted that at 15k miles, the tires had worn down badly. One stated that with less than 4k miles, the front is 11/32 while the rear is already 10/32. Another said at 12k mile; the tire is already 1/3 worn, so they both doubted if it could get to the promised 60k lifespan.

It, however, boils down to what you use the tire for. If the tire doesn’t match the vehicle’s weight, chances are the tires will wear quickly. Secondly, frequently commuting on snow or ice with an All-terrain tire is harmful to the tread’s life.

The Bridgestone Dueler A/T Revo 3 starts at $188 with top size at $390. Many reviewers were pleased with the performance and durability of the tire. Hence noted that the tire is worth the price.

The Bridgestone Dueler A/T Revo 3 is an amazing tire. And would recommend it for anyone who wants a capable tire to go through any terrain in dry and wet conditions. They can cut through puddles without sliding. Dry traction is good, and wet traction is excellent. They look good, ride well and never get stuck even in ice or snow.

Many users were happy with their purchase and tire’s performance noting that the tire is worth every penny. From all information gathered, this is truly an amazing tire for such a price point. Many reviewers like the tire, especially because it performs very well without compromising tread life. Hence giving it a recommendation score of 8.1 out of 10.

The comparison test carried by Tirerack noted that the Dueler A/T Revo 3  were great tires. They liked its durability and responsive steering. However, they would like to see improvement in the tread noise. Nevertheless, The Continental TerrainContact A/T, Pirelli Scorpion All Terrain plus, and the Cooper are better options.

However, amongst the three other options, the Continental TerrainContact seems to be on the higher Side. While the Revo 3 starts at $188, Pirelli at $158, the Cooper at $165, the continental has a starting price of $208.

After a series of research, we can state for a fact that the Bridgestone is a good tire. We, therefore, recommend it for owners of Pick up trucks, SUVs, Jeeps, and crossovers who want all-around performance both off and on-road in any weather.

On snow, you don’t need chains to use them, and it makes you feel you’re in control. They handle amazingly in the wet and in the dry, it feels like a sport’s tire.

However, there are better all-terrain options. Examples are Continental TerrainContact A/T, Pirelli Scorpion All-terrain plus, and the Cooper AT3 4S. Nonetheless, the continental is on top of the Dueler Revo 3 price, while the Pirelli and Cooper come cheaper than the Dueler Revo 3.

So what sets the Revo 3 apart from these options? The Revo has responsive steering and performs very well in the dry and winter. However, in wet performance, including tread wear behavior,  the other three tires are on top of the game.